Bob has taken on the challenge of 3D ship recovery with surprising results: he has been able to restore almost all of the information in the crippled Fralthra 3DS model to its original form! He says:

Here is the mostly complete Fralthra model. I have not added one thing that was not already present in some aspect of the WCII models (in fact, excluding the running lights, everything used is from the original Fralthra model). The textures are rather bright, but this appears to be an unavoidable consequence of exporting to .obj from .max. [At least, in this version. Presumably Autodesk has fixed this in their newest versions.] I had tried to export to .3ds, but problems emerged during the export process that I lacked the energy to solve.

This is not a replication; it is a reconstruction. The model, aside from the rear segment, which remains missing, is complete and the textures are the original ones; all that was necessary was to apply them (and thankfully, the mapping coordinates for them have remained intact.) I have done my best to repair this model, but quite frankly very little needed to be done, and were I perhaps more experienced, had tools closer to the original, I could have had an easier time of it; nevertheless, at this time, this is probably close to the best that can be hoped for this fine ship.

Any errors that may eventually appear will, of course, be my own. Thanks be to Origin for designing and building this, and all the other, models.

... and as soon as Bob's recovered Fralthra hit the vacuum, fans went to work! Death Angel has developed a 'cleaned up' version with higher resolution textures (left) and Kevin Caccamo has created a version with an additional flight deck added to its rear (right). 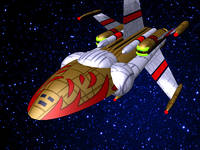 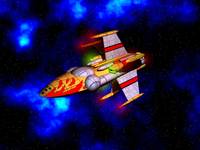