Following on from the news about progressing Linux support, eddieb has released news of what upgrades Flight Commander with receive in its upcoming 1.1 patch. There are a lot of changes to the game and the engine which will make things look a lot prettier. Here are some of my favorite additions:

The CIC's lead graphics person/programmer/procrastinator KrisV turns 24 years old today! That's very nearly old age. You can wish him a happy birthday by emailing him. There is one other big anniversary today - the tenth birthday of alt.games.wing-commander. We can't really pinpoint when a.g.w-c was born, but this date was chosen because it was when the group began to get used.

Star Wars Episode III gets a global launch tomorrow, and early indications are that it is going to be great. Lots of WC fans are waiting for this one. In fact LOAF is already waiting in line along with Frosty and his brother. Internet access in Star Wars queues is limited, but here's a cellphone picture of the queueing action. 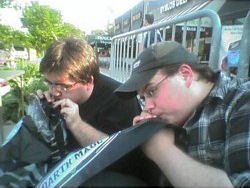