The response to Sunday's Music update has been tremendous. Mad Hatter has run another four Wing Commander III MIDI files through his Roland Sound Canvas for us:

Here's a neat accessory for those of you who've gotten around to acquiring a Game Boy Advance SP. Radica has designed a Game Changer that allows you to plug in three cartridges at once. A switch determines which one you'll be playing. The unit itself is slightly bulky compared to the actual sleek SP case, though it makes the unit itself more manageable if you have larger hands. The combined unit is probably smaller than most bags, and you don't have to worry about keeping track of the small games with it. If you don't have three copies of Prophecy Advance, I'd recommend Advance Wars 2 as a second must-have game. My third slot would probably have a Mario or Zelda game in it. You can order one of these devices for $9.99 or search for one locally in the US here. 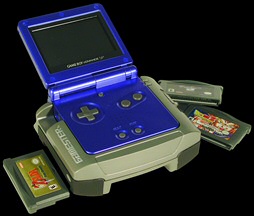