Raoul sent a correction to that previous report about Holland... thanks!

And on the site, I see that it says that there are posters in cinemas, but that's not true.. 'de Megasfestatie' is an event for a week where's also a cinema. But it's not a cinema for the whole year.

Well, here's some great news! The previously reported Tiger's Claw cutaway poster in the works from SciPubTech is now in 'final color work'. It should be ready by September!

As you may or may not have noticed, the logo on our right sidebar means that we're now part of A Talent for War's Infinite Fleet! Keen, non?

Just a bit of clarification -- I'm not selling Wing Commander Prophecy & KS DVDs... just taking a poll to see who's interested in the hopes that it will be able to convince a company to do just that. Erm, but I got a bunch of offers to buy them from me, so I just thought people should know...

Raoul reports that movie theaters in Holland now have up the Wing Commander movie posters... the movie must be coming there after all.

Peter Telep will be holding a book signing on Sunday, August 28th (just in time for Pilgrim Stars!) from 12 noon to 6 pm at Barnes & Noble in Ovideo, Florida! For more information go here. You can also now check out The Official Wing Commander Site Of Peter Telep here! (Oh, and a big thanks to Peter's webmaster, Richard Bowden for keeping us up to date on these things).

Edward Pang reports a small mention of the Wing Commander movie's failure to perform at the IMDb in Thresh's Firing Squad's Freespace 2 review. Check it out here.

While watching the VHS version of Wing Commander, John Casey noticed that after the Skipper missile scene Obutu's line "The Kilrathi ships are closing" doesn't match his lips. I looked up the line in the movie's script, which doesn't even have Obutu in the scene... the same line is said by Radar Officer Falk! Very unusual...

My brother Gavin found an unusual Wing Commander movie figure at Toys R Us yesterday... it's a Marine Blair in the packaging of a Kilrathi Pilot. How odd... (I'd have a picture, except my digital camera is apparently MIA).

Music to Your Ears

Chris Geroux has made us an mp3 of the Wing Commander end credit music. You can grab a copy here.

Lanced.net (your source for Starlancer and Freelancer information) is at it again! "C'mon CIC, get a chick page goin! I myself want to see some Saffron Burrows pics, and you guys got enough resources to get about every possible one". As thus here's TV's Kerri-Lee with the hopes that the hottest woman ever will end this debate once and for all. 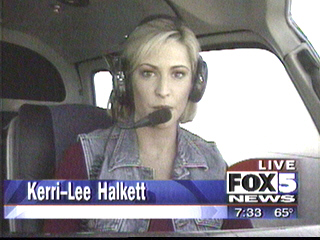