Saxman: Well Bill, looks like we're really in for it now, huh?
Popsicle: Mon dieu, this ain't happening. The cats can't have this many ships!
Trigger: That's right, Popsicle. They're just a figment of your imagination.
Popsicle: No, no, look, this is just too much! Have you seen the vids of them jumping in?
Bradshaw: Ben, could you do me a favour?
Popsicle: Errr, what?
Bradshaw: Cool it. There'll be plenty of time for panic after we kick the cats out of Sol.
Popsicle: Aaaah, and if we don't?
Trigger: Then there won't be anyone *left* to panic.
Popsicle: Oh.

Reismann: Time to really get to work, Captain. The situation is now absolutely critical. Our forces can probably launch one more strike, two at best - and then we're done. There's no way we can beat the Kilrathi with conventional tactics. Now the Admiral, together with General Grecko, the new chief of staff, have come up with an oddball, downright insane plan to win this battle. I can't tell you the details yet, but... let's just say I still can't believe what I've been told. In any case, we still have a bit of time before this new plan goes into effect, and we'll be using this time to soften the Kilrathi fleet up as much as possible. Together with pilots from the Concordia, you'll launch a strike against the leading edge of the Kilrathi fleet - destroyers, cruisers and the like. We don't know if you'll be able to reach any real targets like their carriers, but every ship you destroy will give us a slightly better chance when... when the insanity begins. 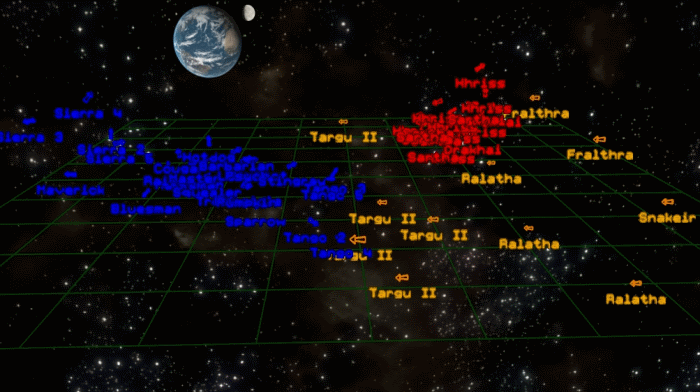 This is one of Standoff's hardest missions, and there's almost as many different suggested strategies as there are people who've finished it. Much of the problem is that all of your excellent flying may be undone by AI wingmen who can't hit the broad side of a catbox with a torpedo.

The fighter choice here is a difficult one - most pilots pick either the Sabre or Crossbow. Flying the mission is a Rapier is certainly possible, and is primarily a case of killing enemy fighters as quickly as possible and knocking turrets off the Targu IIs at the start - knocking out the turret sitting on top of the frigate's bridge, as well as taking down at least half of the four turrets on the sides of the hull helps hugely, because in most cases, your wingmen will be attacking from about a 45 degree angle to the front and side of the frigate.

Load up IMREC's, target Sarthas, and launch them from about 5K or less. After you launch, immediately target the next Sartha and repeat. Don't worry about making sure it hits. It takes too much precious time and those Sartha don't launch decoys. Do this right away and it will instantly build momentum since each of those downed Sartha will free up wingmen to pursue other targets.

After this, order your wingmen to attack a Fralthra. I switch components right after I hear my first wingman acknowledge the command (not sure if this makes the other one target the different component). I then target the bridge after I have them hitting the engines. After you mop up the Fralthra, either take on the next Fralthra or go after the Ralatha's then Targu II's. By the time we did this, several Ralaha's were damaged and the other Fralthra was damaged. After I ran out of torps (afterburners long gone), I focussed on staying alive and protecting the Crossbows from the small amount of enemy fighters left. With two Crossbows left in the action, several Morningstars, and one of my wingmen left with a single torp, we managed to destroy every capship and enemy fighter on nightmare difficulty level.

We actually have numbers at the start, before the Kilrathi launch any of their several reinforcement waves, so the theoretical goal would be to take advantage of this and torpedo the carrier before it can get its fighters off the deck. This is the conventionally accepted strategy for playing this mission in a Sabre. The problem with doing this in a Crossbow is that it takes so long to get into torpedo range that the first batch of reinforcements will launch and kill you while you're partway through your torpedoing. The other important targets to get down early are the Targu-II class frigates, which eat AI torpedoes because of their great turret coverage.

So in a Crossbow that's what you go for. Pick one of the three closest Targu-IIs, get in the blind spot directly in front of it, launch a torpedo. Hit the map, target another nearby one, kill it (you'll probably have to get close in on this one since it'll be difficult to maneuver to right in front. Hopefully Concordia's Morningstars or your wingmen will knock out two or (preferably) three of them while you're doing this. If not, you can probably forget about a clean sweep, though it may still be possible to accomplish the mission. By this stage the first wave of reinforcements has probably launched and you'll be outnumbered.

At this point you need to finish up the frigates as quickly as possible, and then move on to the carrier (or one of the cruisers if its been hit hard, like it is in the video run), all the while checking for enemy fighters trying to kill you (an FF missile can one-hit kill a Sartha but not anything heavier, so try and use your missiles on them). Order your wingmen after any of the fighter-carrying ships you aren't going for. If you can take down two of the three fighter-carrying ships, then your Rapiers and the Concordia's Epees will stay on top of the Kilrathi, and all you have left to worry about is whether you have enough torpedoes left - though if you've killed more than about 5 or 6 ships you'll probably get mission accomplished if you retreat when Bradshaw says to, which is when the strike force is out of torpedoes.