The good news is that I got the files correctly. The bad news is that I'm having to struggle once again with the different map channels because I can't get the ship editor to understand that many sub-meshes have different textures at once. I'm pretty sure I'll find again how to do it, though. As for the ships themselves, I might add them to the WC3/4 era as additional Confederation ships of the line given that their texture style is fitting the rest of the ships there while the versions from Klavs would be the featured in the WC 1/2 era (the next update will allow you to select before starting a game in which era you want to play, restricting the build and research trees to the stuff of that time, so no Excalibur VS Drakhri).

The next update will contain a new option for the skirmishes, allowing the players to switch from WC 3/4 (current mod) to WC 1/2, adding the following ships:

The capital ships' order of battle can be seen here: As you can notice, the scales are a tad wrong, and many of the ships will be doubled in dimensions.

And now, for the pictures of the resized ships: EDIT: I've finally managed to push my gaming laptop in having visible lag. These models are pretty huge, so keep that in mind if you want to play. As for multiplayer... here is a handy list of the systems you will need.
Last edited: Sep 10, 2017

Terrific work guys! So happy to see these things in action!

Looks like we have a new guest to the party. @Deathsnake has offered his Tolmaty light cruiser to the mod. In the current iteration, it would be the detroyer equivalent of the battlecruiser of the first half of the 20th century: heavily armed but particularly fragile. The ancestor to the Cerberus strike cruiser, the Prowler Special Operations corvette and the Black Lance ships, it appears to be an advanced modification to the Venture, designed to be a dangerous raider by itself. It carries a single AMG turret capable of dealing massive damage to smaller ships all the while keeping the tactical flexibility Kilrathi destroyers of the era lack as their AMG guns are fixed. In addition to this, its armament is absolutely incredible, with two missile turrets, twelve laser turrets, two flak turrets and four pod-mounted frontal torpedo tubes. The entire front of the ship was turned into a hangar capable of supporting a handful of fighters and shuttles for support.

The problem of the ship is that to fit all of these amazing offensive capabilities, its protection is almost non-existent despite its extreme cost, close to a Gettysburg heavy cruiser's. If a single torpedo gets through its defences, the ship will not come home.

Note: this is the current interpretation of the ship, if @Deathsnake has other suggestions, it will most likely change accordingly (it just needs to fit within the gameplay and not be too OP, for example).

The Tolmaty alongside an Exeter and a Gettysburg: The hangar deck and the external weapon pods (two laser turrets and two torpedo tubes on each): The AMG turret on the bottom of the ship: A hangar configuration reminiscing of a certain Black Lance station: On a game design standpoint, it allows me to continue on the gameplay choice from the Wing Commander III/IV era mode, where the Kilrathi have better ships of the line than the Confederation but the latter's top-of-the-line ships kick ass really hard if controlled properly while being hard-countered if the opponent is competent enough. The Prowler had an AMG turret on a corvette, a cloaking system and mines, which made for a hilarious harassment ship that would still get wrecked by a couple squadrons of bombers if they caught up to it. This ship? Well, it will definitely have enough firepower to demolish any destroyer it finds, without even speaking of corvettes or frigates. However, this applies only if it controls the tactical situation. A Kilrathi destroyer managing to gets its sight on the Tolmaty from medium range will absolutely own the sh** out of it with its main AMG guns, because the Tolmaty is a glass cannon with heavy short-range anti-ship armament, absolutely monstrous anti-air firepower, but it will die in a couple of shots. And if it gets caught on its top hemisphere, it will die without even firing back. Bombers attacking it can also whack it out of action as long as the offensive involves some sacrificial pawns to keep the turrets and the escort fighters busy. This ship does not tolerate any mistake from any side. Whoever fails to take its strengths and weaknesses into consideration will die, be it the ship itself or its target.

The Tolmacs is from @NinjaLA, @Howard Day build a awesome model. I want that in my old Enigma 2666 and Cybot078 build the model for me. Kevin make it ready for Wing Commander Saga Prologue

It is a light cruiser (we have no light cruiser in WC1+2) but from the Novel some light cruisers are at the Battle of Vukar Targ or destroy Kilrathi Supply Convoys together with CVE. In fact the Tolmacs have a Hangar up and a much larger down. So it could carry easy the same complement of fighters like a Wake but with more Firepower - 3 AMG (those bigs on the side are AMG too) and a lot of laser turrets and 4 anti fighter Missile launcher. Size is about 480m - smaller and Shorter then a Waterloo heavy cruiser. The Counterpart to a Fralthi 1 while the Exeter was it for the Ralari. The Problem of the Tolmacs - it can Launch up to medium fighters only - Hornet, Scimitar, Rapier, Epee, Ferrets - no Broadswords, Sabre or even Raptors. 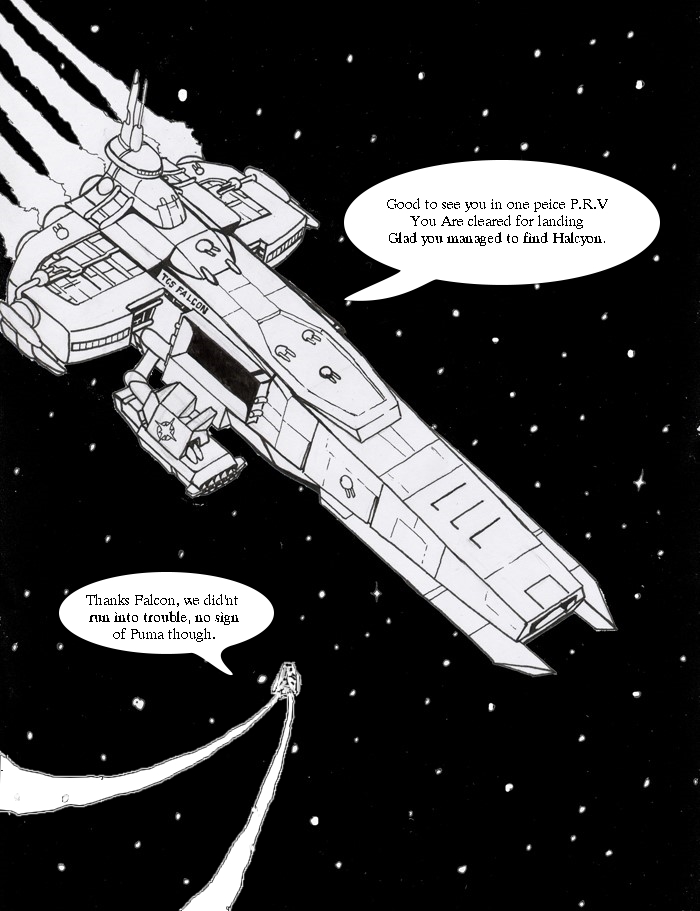 I want to use it as a WC1+2 light cruiser while in WC Saga for the WC3+4 timeline (Last Line of Defence and Operation Serpent) the light cruiser is the Savannah. Near the same armament - minus the Anti Capship Missile launcher and the fighter complement. The Talahassee has also less fighters then a Waterloo. Here the pic of the old Saga Prologue models i used for Enigma 2666. I make a few pics LIF if you don't see the lower deck.

Upper and lower deck of the Tolmacs. 2. Pic is the lower deck. 3 Elevators can carry fighter up or down. Each deck has its own Launch bay

Comparison to the Wake Deck

That's quite the info, alright! First of all, I kinda wonder where does the high-resolution render you had in your first post come from, because I would possibly be able to get it ingame if you have the model and texture files. As for the cruiser itself, it looks like I might have to increase its size a bit. Still, that's one hell of a strong armament there, definitely stronger than the Fralthi's, so I will have to take it into consideration when working out the final configuration of the ship. For example, the Savannah, in the mod, has less anti-ship firepower but better sensors than the Talahassee, allowing it to be useful against cloaked opponents as a fleet escort. I mean, here, it does sound a bit OP. ^_^;

Those pics are from Howard Day
https://www.wcnews.com/chatzone/threads/progress-update-2.21803/
page 1+2 his Exeter and Tolmacs

Deathsnake said:
Those pics are from Howard Day
https://www.wcnews.com/chatzone/threads/progress-update-2.21803/
page 1+2 his Exeter and Tolmacs
Click to expand...

Aaaaand it's online! I tried to squash as many bugs as possible, but there are probably some that escaped me, so bug reports are welcome.

Well, sad update: the files I want to upload are working properly, but the uploader is making one hell of a mess and whatever is on Steam currently causes an immediate CTD when you try to start the mod. ARGH!

Trying to squash that problem.
F

Is there any chance that an upload on ModDB could work?

FekLeyrTarg said:
Is there any chance that an upload on ModDB could work?
Click to expand...

Well, It could, but that would not be a .big file, so you would have to use the -overridebigfile command, but... yeah, I guess so. I'll do it today while waiting for my dad to try and upload the file on Steam from his end back in France tomorrow.

EDIT: uploading on ModDB now, should be online within the hour.
Last edited: Oct 20, 2017

FekLeyrTarg said:
Is there any chance that an upload on ModDB could work?
Click to expand...

Keep in mind that there will probably need some modifications and corrections since I did not have the opportunity for a feedback cycle from Steam. The good news is that since it's uncompiled, patching it will be easier.

Instructions for use: unpack the .rar file in your Data folder, use a shortcut with -overridebigfile as the command rather than the -mod one.

And after two days of work, it's finally operational again. I had to split up the mod new content in a new additional content pack. So, without further ado, I am glad to present you... (the Sabre comes from a picture made by @Klavs81 a few years ago, I thought it was appropriate given his work for this patch)

In addition, the unit guide is online now and I will update it with the Secret Missions' ships over the next couple of weeks.

Mod DB's facebook page was actually pumping the mod a few days ago: