Hades is cold, dark and isolated. Most of its 500+ million inhabitants remain on the planet against their will. For centuries, the planet was used solely as a military base. However, as populations boomed on other planets, the "not in my backyard" sentiment relocated more and more prison colonies to this desolate outpost. With the prisoners came the CIS, and eventually, CIS business headquarters. Currently, most high-ranking CIS officials flatly refuse to live there, viewing Hades as a proving ground for the young, the inexperienced and the fanatically obsessed. 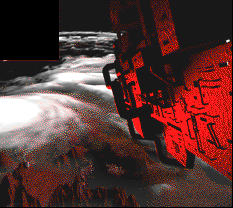 BACKGROUND:
In a recent 'Where would you ideally spend your holidays?' survey by the consumer programmer Argushund, Hades managed to poll a startling -15% of the poll group, mostly due to people answering 'Anywhere but Hades'. The furthest planet in Irrulan from the sun, Hades is a dank, gloomy, freezing cold, inhospitable, poisonous lump of excreta, inhabited solely by prisoners, the CIS and the Military. Originally settled for 'Experimental Scientific Research (Military)', it later became the ideal dumping ground for any irremediable criminal, hence the presence of the CIS as well. Attempts to completely relocate the CIS off planet have been abortive; despite the excellent security it offers, many agents have refused point-blank to move there, as their families have threatened to excommunicate them if they do so. Leisure time on Hades being less fun than an infestation of Karatikan rectal mites, the average trader will have little need to leave the customs house before taking off as fast as afterburners allow, but a little research into living conditions may pay dividends; there are a fair few people here, all earning high wages for their considerable trouble, and that's an awful lot of disposable income going begging.