Karatikus was one of the first planets to be terraformed as a potential colony for Hephaestus. Lack of practical experience with the procedure produced unlooked-for results ― the most tragic of these was a short-lived radioactive isotope that genetically mutated the first Karatikan colonists. Decades later, Karatikus was declared safe for mass colonization, and new arrivals quickly outnumbered the original mutant settlers. Now a persecuted minority, the first Karatikans have recently taken up arms (no pun intended) in protest of their unequal treatment. Sporadic guerilla warfare between Karatikan rebels and the CIS continues to this day. 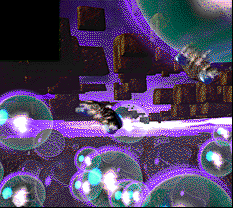 BACKGROUND:
Of all the planets in the Tri-System, without doubt the oddest is Karatikus. When discovered, it was a bare, rocky world with an unbreathable methane atmosphere. Similar in size and gravitational field to Anhur, it was ideally suited to terraforming, a process devised by Professor Ernst Kugelbender of the Hephaestan Research Institute. Unfortunately, the process had not been perfected when it was implemented, and although a partly breathable atmosphere was generated, there were numerous unfortunate side-effects, such as curious blue-green atmospheric aurora, insanely bizarre flora and the notorious Geogravitic Strata, a layer of 'hovering rocks' that float above the planet's surface. More worrying was the generation of a powerful but short-lived radioactive isotope, which mutated the first wave of unfortunate settlers; their offspring turned out to be of unusually large physical build, and possessed of limited psionic powers such as psychotelepathy. Karatikan mutants are deeply mistrusted throughout the Tri-System, and are among the galaxy's most persecuted minorities, along with the Anhurian Original Humanists. The mutants are nevertheless very personable, and hospitable to those who show sympathy to their cause. This, along with the hallucinogenic terrain, has made Karatikus a favourite with bohemian travelers, and a visitor to the planet will soon become accustomed to the constant refrains of 'Wow!', 'Far out, man' and 'Spacious' that resound up and down the planet's landmasses. I can recommend the world as a exceptionally stable market for firearms (for the oppressed mutants), mind-bending substances (for the hippies), and, more recently, mining equipment, in demand from hordes of archaeologists that have descended upon the place; surveys of the planet have revealed what appears to be remnants of an alien civilisation, the surviving technology of which may have given rise to the terraforming accidents, and keen researchers have become ubiquitous. Sadly, due to the current guerrilla war being raged by the mutants upon CIS land forces, the entire planet has been quarantined until further notice.