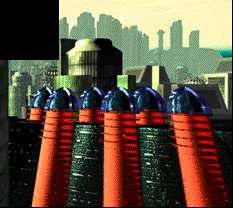 BACKGROUND:
Starting out as a sandwich ordering service in the adolescent dawn of Crius' astonishing economic evolution, the Crius Net now connects all aspects of commerce, communication and entertainment across the planet. Its founder, Vrootle Pigfididrin recently made history after his fifth brain relocation transplant operation brought him up to the grand old age of 420 years. Speaking from his private penthouse complex at the Avalon Convalescence Dimension of Zib, Pigfididrin was quoted as saying "I feel like a new man, and a new woman too for that matter". Solicitors acting for his 212th wife Serefina Mucholusholise say that they intend to include Pigfididrin's new DEDFLASH space/time cruiser in their claim for alimony settlement. The revolutionary new craft has computational power so powerful that it sees into your planned journey's future and decides whether you are likely to enjoy it or not. If danger, trouble or boredom are detected, it simply refuses to take you. Pigfididrin is rumoured to have blown a small star system on acquiring the ship.