Crius became the medical center of the Tri-System quite by accident. Early settlers were first drawn by the beautiful Crian alpine landscape. However, these glacial mountains harbored unseen peril — hardy bacteria not found anywhere else in the Tri-System. In order to make the planet habitable, considerable time, effort and research were devoted to conquering these intractable germs. In the process, research labs, medical universities and hospital complexes came to dominate the planet. 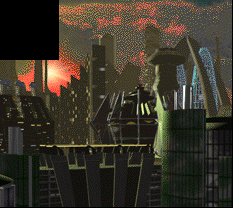 BACKGROUND:
The Crian Planetary Flag shows a skiing doctor rampant on a mound of deceased streptococci, which tells you just about everything you need to know about this place. Crius has been a centre for medical excellence ever since the first settler, Jenkum Diddlybitz, stepped onto one of the many imposing glaciers, breathed deeply in the crisp, fresh air, and promptly collapsed with a triple intestinal prolapse, a consequence of a particularly virile bacilla native to the planet. Ninety percent of the first settlers died of various unpleasant diseases, and the survivors have been battling infectious death ever since, simultaneously building some of the cleanest, whitest hospitals you've ever seen. Popular with mountain sports fanatics and the terminally ill, Crius is a pleasant place both to live and holiday, with the uncrowded conditions making for some of the Tri-System's cheaper real estate. The only problem with the place is the company; after a while, beery rugby-playing doctors, technicoloured snow surfers and vacant, grinning nurses tend to irritate somewhat. Still, Medical Supplies of all varieties are cheap and plentiful, and they do a great line in restorative liver, heart and lung surgery. I wish the genito-urinary specialists didn't have such cold hands, though.