Wing Commander Academy is a 1993 space combat game developed by Origin Systems and published by Electronic Arts. Academy is primarily a mission builder based on technology and assets developed for Wing Commander II: Vengeance of the Kilrathi. The game allows players to populate up to four nav points with a variety of objects including enemy spacecraft, asteroids, mine fields, data pods, ejected pilots, random encounters or space stations which may be defended. Mission designers can choose the AI level for the opposing spacecraft and players may choose to fly missions using one of nine spacecraft and four wingmen. Missions may be saved as files and traded to be flown by others. The game also features a "Gauntlet" mode which pits the player against fifteen pre-constructed missions which each consist of three waves of increasingly difficult opponents.

Players are said to be students at the Terran Confederation Space Naval Academy who are using a new simulator to train for space combat missions. While the game itself does not have a specific story line, its manual includes lore which suggests that it takes place shortly after the events of Wing Commander II. Academy is the first spin-off of the Wing Commander series and was developed as a budget title which could expect to turn a reasonable profit and keep the Wing Commander IP in players' minds during the expected lengthy development of Wing Commander III. The game features a single, short cinematic as its introduction and the majority of its graphics, sounds, speech samples and gameplay mechanics are recycled from Wing Commander II. Academy adds two flyable fighters, the Wraith and Jrathek, as well as three new gun types and an additional missile. 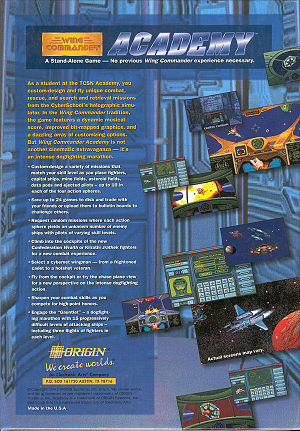 As a student at the TCSN Academy, you custom-design and fly unique combat, rescue, and search and retrieval missions from the CyberSchool's holographic simulator. In the Wing Commander tradition, the game features a dynamic musical score, improved bit-mapped graphics, and a dazzling array of customizing options. But Wing Commander Academy is not another cinematic extravaganza — it's an intense dogfighting marathon.

Wing Commander was not localized by Electronic Arts but was released in France and Germany with translated documentation. Electronic Arts sold an additional 500 copies through InterTAN (Radio Shack) in Canada; while these were assigned a unique EAN they have not been proven to have been physically different from the standard North American release. In Asia, a version without localization was published Taiwan by Soft World. DROSoft released a localized version in Spain.

In 1995, Electronic Arts released a CD-ROM-to-hard drive version of Wing Commander Academy as part of the initial set of Electronic Arts CD-ROM Classics titles. In 1996, the same release was published again in a jewel case. In Europe, Ocean released Wing Commander Academy as one of the final titles in the Hit Squad series as a "£14.99 PC Prime Contender".

GOG released a digital edition of Wing Commander Academy bundled with DOSBox and configured for modern systems in 2013.

In March 1994, Origin Systems announced internally that they had partnered with CD Select to release a trial version of Wing Commander Academy which would be included on a CD containing a collection of applications and games. CD Select's system would allow those who enjoy the game to call an 800-number to pay and unlock the full program. It is not clear if this release ever made it to market.

These three images were provided to press in 1993 and were made available through Origin's BBS. Several differences are visible between these captures and the release build of the game. In ACTION, the Wraith displays a Morningstar's VDU, "leech" is misspelled as "leach" and the target being communicated with is identified as "Enemy 2" instead of a ship type. ENTRY has a darker cursor than the finished game and red menu text instead of blue. It also lacks the buttons to the quick start buttons located to left and right of the simulator. SELECT shows an entirely different set of wingmen (Rusty, Dingo, Gauntlet and Harridan in place of Hobbes, Angel, Maniac and Lightspeed, respectively) and seems to use the identifier "Zealous" instead of "Excellent". The VDU face shown for Dingo does not match any that appear in the final game.

These twelve images were captured by GOG from the release build for their Wing Commander Academy sale page.

The Wing Commander Academy team shirt features a school seal drawn by Origin System artist Paul Steed. The seal features planets, spacecraft, a book and an armored Kilrathi head. The text reads "established 1993" in reference to the release year of the game and gives the Latin slogan "fac ut gaudeam" which translates literally as "do it so I may be happy." The source of the slogan is the 1991 language book Latin for Even More Occasions by Henry Beard which gives "Age. Fac ut gaudeam." as a translation of Clint Eastwood's Sudden Impact catch phrase "Go ahead, make my day."

The GOG release of Wing Commander Academy triggers a hard crash when you select 'execute' to start a mission. This is because the game has not properly generated four temp files, AS.0 through AS.3. To eliminate the crash, simply save and then load one mission which will prompt the game to create the missing files and the crash will not recur. Alternatively, you can download the missing files here (888 bytes) and place them in your GAMEDAT folder.

Wing Commander Academy supports the Roland LA MIDI standard which means that it can use an MT-32 or similar device to play its soundtrack as originally composed. In a modern Windows environment you can emulate an MT-32 using special software and then modify the game's configuration to use it to play the improved score with these instructions:

Changing the following values in your dosbox_academy.CONF in the GOG version of Wing Commander Academy file will make improvements to the quality of how DOSBox runs the game. Make these changes after configuring MUNT.

Because Wing Commander Academy shipped on 3.5" diskettes its digitized speech was limited to enemy taunts. Players can easily add speech to the game for Candar Station and three of the wingmen by copying and renaming files from Wing Commander II to Academy's GAMEDAT folder. You can download the files already renamed here. There is no speech for Lightspeed in Wing Commander II.

ThrustMaster released a Wing Commander Academy profile for the WCS/(P)FCS which is available here.

Wing Commander Academy allows players to save up to 24 missions. Saved mission files are stored in the MISSION folder and are labeled MISSION.001 through MISSION.024. Players can exchange missions by sharing these files. Over the years, many players have posted their own missions and even entire campaigns for download. Mission downloads typically include a text file which acts as a background and briefing.

Wing Commander Academy is given an oblique reference in Chapter Three of Fleet Action which mentions that Jason Bondarevsky had briefly spent time at the Academy running the new simulator before rejoining the Tarawa: "Jason walked around the bridge one last time. It had been his bridge for really only a very short time. After the raid on Kilrah the ship had been laid up for a year. It would in fact have been far cheaper to simply scrap her and build a new one from scratch, but public opinion was dead set against it. During that year he'd been stuck Earthside, assigned to the fleet war college for advanced training, finishing up with a brief stint at the Academy to run their latest holo combat simulator training program. But the ship had sailed at last, only to serve in one final brief action before the armistice. Yet, it was his ship, it was in fact, since Kilrah, the only thing he really loved."

Between Missions - Use ↓, ↑, ← and → (or the numeric keypad) to move the arrow pointer. When the pointer’s shape changes into a cross, press ENTER to select functions.

In Space - Both the numeric keypad (with NUM LOCK off) and arrow keys are active for controlling flight.

Between Missions - Move the joystick to maneuver the arrow shaped pointer around the on-screen picture. When the pointer’s shape changes into a cross, press button #1 to select functions.

Between Missions - Move the mouse to maneuver the arrow shaped pointer around the on-screen picture. When the pointer’s shape changes into a cross, press the left mouse button to select game functions.

Note that "ERTS" must be in ALL CAPS for the cheat to work.

The Gauntlet is a series of fifteen scripted levels each with three waves of enemy ships intended as a challenge for players. The Gauntlet increases in difficulty beginning with very simple encounters and becomes extraordinarily challenging as it progresses. Players may choose to fly any of the game's nine ships and with any one (or none) of the game's four wingmen. Progress through the Gauntlet is scored based on the enemies killed and the ship flown. The player's shields are automatically recharged after each wave and ships are repaired and rearmed between levels. Top Gauntlet scores are displayed in the game's main menu and completing the challenge rewards the player with a unique screen.

The Gauntlet scores players per kill. Each type of enemy ship has a base value which is multiplied by a modifier determined by the type of ship the player has chosen to fly. As a result, a kill scored by a Ferret (125x the target value) is worth significantly more points than one scored while flying a Wraith (65x the target value). Wingman choice and enemy AI do not factor into the score and enemy spacecraft destroyed by wingmen or collisions do not count towards the player's total. Enemy bombers (Broadsword and Crossbow) have an additional scoring mechanic in which their value increases depending on the number killed in a given wave. The first is worth seven points, the second ten and any others are worth fifteen each. If the ERTS command line cheat is used to start the game then the player ship modifier is nullified resulting in a very low total score. The maximum potential score in the Gauntlet is 213,875 points for flying a Ferret and scoring every possible kill (if the three enemy ships scripted that do not spawn were available the maximum total would be 216,875.)

This chart displays the types and AI levels of opponents scripted to appear in each wave of the Gauntlet. Two waves request more spacecraft than the eight simultaneous opponents game is capable of displaying. As a result, one of the Drakhri in Level 12, Wave 3 and two of the Sartha in Level 14, Wave 3 do not actually spawn.

One update to the Wing Commander II technology is that Wing Commander Academy can display animated skybox objects which include rotating planets and stars.