Dr. Tuesday Brody was a Terran civilian scientist from the Terran Confederation. She was also an unwilling accomplice of the Black Lance.

Dr. Brody was one of the Confederation's leading experts in the field of bio-convergence, a scientific field that dealt with the study of human DNA for various military purposes. By 2673, Dr. Brody had accomplished much in the field, to the point where she could employ human DNA codes to program microscopic nanobots. Her contributions to bio-convergence attracted the interests of many Terran military personnel.

Unknown to the Confederation crew of the Lexington, operatives from the Black Lance had deceived them into rescuing Dr Brody for their own intentions, without Confederation authority. Shortly thereafter, the Black Lance used Dr. Brody's expertise in bio-convergence to accomplish a systematic extermination of humans who would contribute little to the future of the Terran military. She was secretly transferred to the Axius Star Base in the Axius System, where she was held hostage and forced to work under the direction of the Black Lance.

During her captivity at Axius, Dr. Brody unwillingly created the Gen-Select Bioweapon, a device designed to exterminate humans whose genetic codes and DNA did not match the pre-selected standards programmed into the nanobots deployed by the device. Whereas those Terrans who matched the codes would be unaffected, those who did not would suffer a slow, horrific death as the nanobots broke down their cellular structure. The device was tested on the Border Worlds colony of Telamon, where 90% of the population died.

Colonel Blair discovered the existence of the Black Lance at Axius after having tracked the attackers from Telamon back to their base. While trying to escape, Blair encountered Dr. Brody, who recognized him immediately and insisted on escaping with him, saying she could help the Confederation stop the Black Lance. The two fled to the hangar where Blair's F-107 Lance was waiting. 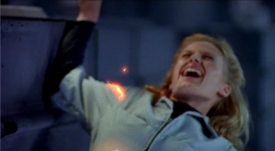 Dr. Brody is fatally shot while fleeing the Axius Star Base.

Blair and Brody were ambushed by Black Lance security forces and despite Blair's attempts to defend her, Dr. Brody was shot in the back. Knowing her wounds were fatal, Dr Brody gave Blair a data disk carrying intelligence vital to stopping the imminent war between the Confederation and the Border Worlds. Brody died on the station, but her legacy ensured that Blair was ultimately successful in stopping the Black Lance conspiracy against humanity. 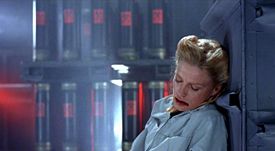