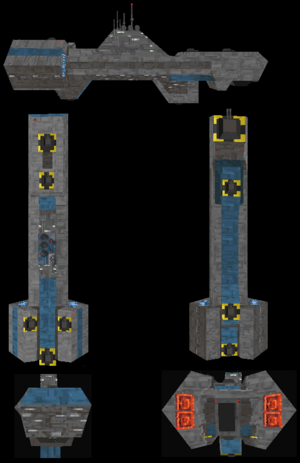 The Southampton-class destroyer was a warship that was widely used by the Terran Confederation during the Terran-Kilrathi War. It is also used extensively by the Union of Border Worlds.

The Southampton is everything a true destroyer is: A small, heavily-armed warship capable of taking on any capital ship without the need for fighter escort. It fills many roles on the front lines, including system patrol, escort ship, and capital ship interceptor. Many Confederation task forces include at least one of these powerful warships as an escort, defending the fleet carriers that would otherwise be destroyed by the Kilrathi.

Some models of the Southampton class possess a small fighter bay, located on the stern of the ship between its engines. Ships with this feature are capable of carrying a small half squadron of fighters, numbering five ships.

The Southampton was serving in just about every sector along the front lines by the later stages of the Terran-Kilrathi War. Two famous ships in this class were the TCS Sheffield and the TCS Coventry, which served alongside the TCS Ajax in Destroyer Squadron 67, the task force assigned to escort the TCS Victory. Famed Terran pilot Jason Bondarevsky commanded DesRon 67 on the Coventry, and was badly injured when that ship was crippled by a Kilrathi mine (Bondarevsky recalled it is a missile strike in 2670) during the Behemoth debacle. Both vessels participated in the numerous engagements fought by the Victory up until the end of the war.