This horrible device emits a blastwave from the vicinity of your ship powerful enough to annihilate everything in close proximity but the most resilient dreadnoughts. The damage is worse near the epicentre, dissipating outward. The device carries a small synchronic temporal warp generator which at the point of detonation throws you marginally forward in time after the blast, giving you escape from the carnage. However, it does not extend this benefit to any cargo ships or wingmen you may have in tow, who will encounter a particularly terminal, and bad, day. The Campaign for Real Time considered this weapon to be a breach of most time laws and lobbied against its legality, until one day, quite by accident, a rogue Nuke 'em landed on their offices during an annual general meeting. (27) 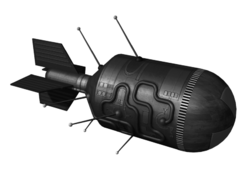 Nuke'em NUKM
This is a smart bomb. If you use this beast, all small ships in a specific local vicinity will be destroyed, as well as causing a lot of damage to larger ships. (54)

Emits a blast wave from the vicinity of your ship powerful enough to annihilate all but the largest ships within close proximity. Damage is worst near the epicenter, dissipating outward. Includes a small Synchronic Temporal Warp generator which protects your ship from the blast.

Ah, the Nuke'em bomb - the greatest toy in the Tri-System. Sure, they're expensive, but the amount of indiscriminate damage they do would make the sourest Original Humanist giggle (inwardly, of course).

These bombs have a blast radius extending out to about the first ring from the center of your radar in long-range CelestialTSM mode (about 500 klicks). When you drop a Nuke'em, all ships within the ring will be affected ― except your own ― and most (if not all) will be wiped out. The closer a ship is to the center of the blast, the more likely it is to be completely destroyed.

Once released, the bomb takes 5 seconds to prime before it detonates.

Nuke'em bombs blow up everything within their blast radius. This includes friendlies, wingman and fair maidens in distress. This is not a good option for escort or rescue missions, unless you can get your pals out of range before you drop.