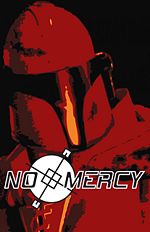 Poster for the holovid "No Mercy"

No Mercy was a holovid created by the Digital Holovid Company. It's was based on the true story of the man who brought down the WEC. The holovid was writen and directed by Aaron Dunbar and starred Keenan Weaver, Morgana Carr, Clint Mason, and Allen Amikov. The holovids music was provided by Aaron Henton and was produced by Tristan Roberts.

The holovid earned an R rating due to ultraviolence and android nudity. The promotional campaign for the holovid included an advertisment in the January 2701 issue of Star*Soldier magazine.

No Mercy is apparently based on the Crusader series owned Origin Systems.