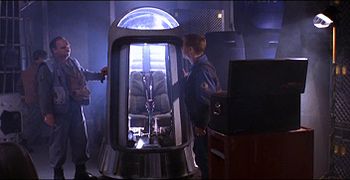 A Manned Insertion Pod (MIP) stationed aboard the BWS Intrepid.

The Manned Insertion Pods, or (MIPs) are small single-person pods designed and fielded by the Terran Confederation for the purpose of covert insertion.

The Manned Insertion Pods were designed with the purpose of covertly inserting operatives into enemy installations and starships whenever the insertion of personnel by transport or shuttle was rendered impractical by the circumstances of the operation at hand. Designed as a cylindrical single-person pod, the MIPs were transported by starfighter as if it were any typical ordinance such as a missile or torpedo. The fighter would launch the MIP towards its target once it got within a safe distance from which the passenger inside the MIP could easily latch themselves onto the target. The MIP possessed limited steerage and thus required close insertion to avoid detection. Once docked, the MIP could cut into the hull of the target by means of a laser, allowing its passenger to enter the enemy vessel and carry out their objectives. The pilot would then retreat to the MIP and drive themselves back into space to be retrieved by the tractor beam of a friendly starfighter.

The MIPs were designed after the conclusion of the Terran-Kilrathi War and were still in testing by 2673 during the Border Worlds Conflict. A few examples of MIPs were acquired by Chief Technician Robert Sykes, who stole them from a Confederation testing facility for use by the Union of Border Worlds. Sykes maintained the pods in his possession aboard the BWS Intrepid.

In 2673 the Intrepid, now under the command of Border Worlds sympathizer Captain William Eisen conducted a mission to gather intelligence on illegal Confederation activities on the frontier from a Confederation communications outpost orbiting Orestes IX. Colonel Christopher Blair was assigned to deploy two MIPs piloted by Lieutenants Velina Sosa and Winston Chang to infiltrate the outpost and recover the data. Despite the successful insertion, Chang and Sosa were ambushed by Confederation security guards after successfully acquiring the target data. Chang was killed in a successful holding action that allowed Lieutenant Sosa to return to her pod with the captured intelligence; she was subsequently retrieved by Colonel Blair who tractored her in and returned to the Intrepid.

During the action in the concurrent Circean Civil War, the Intrepid's flight wing deployed an entire force of Space Marines down to the surface of Circe V in MIPs to destroy an underground base serving as the headquarters to the rogue Confederation forces instigating the ongoing fighting in the system. The operation was a success and the entire strike team escaped in the MIPs just before the station was destroyed by the explosives.

A similar action was conducted in the Speradon System when a team of Border Worlds Marines were deployed via MIPs to commandeer the flagship of a Confederation convoy supplying a large amount of ordinance to the rogue faction stationed within the system.