The K'ha'haf is a fighter that saw limited service with the Kilrathi Empire. 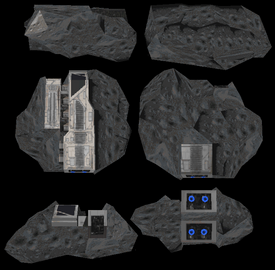 An oddity among Kilrathi wartime designs, the K'ha'haf was in a sense developed as a stealth fighter. It is a starfighter chassis built upon a large mass of rock, just large enough to allow for unaltered spaceflight. Being mostly composed of an asteroid, the K'ha'haf is able to hide itself among the asteroid belts strewn across the galaxy, sitting idle until unsuspecting Terran ships passed through their field, allowing them to ambush Terran patrols and convoys without advanced notice. Their rocky mass provides them with a thick and sturdy shield, meaning they can absorb numerous laser shots without sustaining major damage for long periods of time. Fairly swift despite their large frame, the K'ha'haf in its limited service proved to be a fighter to be reckoned with.

The K'ha'haf was first sighted during the final days of the Terran-Kilrathi War in 2669. One notable sighting was by the pilots of the TCS Victory during the capture of a Kilrathi convoy in the Torgo System. Several K'ha'hafs ambushed Colonel Christopher Blair's wing during an attempt to disable a Kilrathi tanker convoy as part of the shakedown cruise for the TCS Behemoth. Despite their strong shields, they were ultimately destroyed by Blair and his wingmen.

The K'ha'haf would continue to reveal themselves sporadically until the end of the Kilrathi War, but ultimately did little to turn the tide against the Terrans, who destroyed Kilrah by the end of 2669.