Invisible Enemy is the tenth episode of Wing Commander Academy aired and the eighth episode produced. 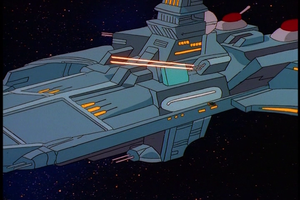 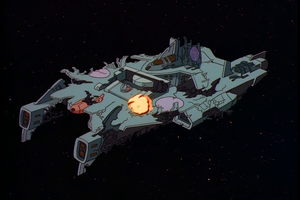 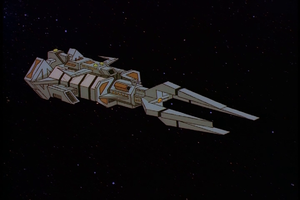 Maniac: I got contact. I'm reading one ship... oh, furballs!

Easy: And he's changing course. What do you think?

Maniac: I say we scratch this cat right behind the ears. Hold position and cover me. Keep an eye on your sensors, Easy, I don't want any furball surprises.

Easy: Screens are clear, go for it, Maniac!

Maniac: Oh man, I hate missiles that don't know when to quit. Target this, dumb shot! Well that's why they call them missiles... 'cause they always miss. (laughs) Woo-hoo! Hey Easy, too bad you couldn't watch me take care of that furball. You might've learned something. (laughs) Easy? Hey, Easy? Speak to me, man. Maniac to Easy, come in Easy. Oh no. Easy. I told you to watch your screens.

Zurakh: I see you Terran, but you do not see me. Your sensors are blind. I could destroy you as easily as I destroyed your wingman. But not yet. Fly home, Terran. Lead me to your carrier.

Tolwyn: No matter how many times I perform this duty it never gets any easier. And it's been done too many times in this war. I believe that some part of the universe will always remain unknown to us, a mystery beyond the limits of our understanding. Cadet Emil Zoharian is now a part of that mystery. We salute his sacrifice. He now belongs to space, the emptiness that contains all things. May be find the peace we all seek.

Grunt: Understood Tiger's Claw, we will hold our position. Convoy escort out. Hear that, Archer? We're cleared to land as soon as the salute's over.

Archer: No, not another one. It's never going to end. Never.

Zurakh: Four transports and the Tiger's Claw. Now that is a prize worth taking. Enjoy the time you have left, Terrans. You will be mine.

Kirnok: Well, did the Terran sensors detect you?

Zurakh: I approached from behind. They never knew I was there.

Kirnok: Behind? I am not convinced. There must be a second test.

Zurakh: There was a second Terran, I let him live.

Kirnok: What? You let him live!

Zurakh: He led me to four transports and a carrier. The Tiger's Claw.

Raker: I just lost my appetite.

Payback: I'm not too hungry myself.

Maniac: Looks like I'm about as popular around here as chipped beef on toast.

Maverick: Well, you better get used to it. There's a lot of people who want to know what really happened out there with Easy. Including me.

Maniac: I made my report to Tolwyn. Read it yourself.

Maniac: What makes you think I care what you think?

Maverick: Hey, the pilots from Trafalgar won't fly with you anymore. Nobody else wants to, either.

Maniac: They won't have to, I've been grounded. Happy?

Grunt: Let them play it out.

Tolwyn: Red alert, all pilots to the hangar deck. Scramble.

Maverick: Guess you'll be sitting this one out.

Tolwyn: Protect the transports at all costs.

Maverick: Maverick to all fighters. You heard the man, we're playing defense, keep them away from the transports.

Maverick: Don't let any of them get through.

Archer: Watch it, Payback, you got one on your tail.

Payback: I see him.

Raker: I'm getting laser fire but no...

Clipper: Raker's down. He's gone. I don't see what got him. There's nothing on my sensors. What was that?

Maverick: Say again, Cipper. Sensors read you and no one else.

Clipper: I'm not making this up, Maverick.

Maverick: I've got visual contact, I see him. Where'd he go? He's off my screens.

Zurakh: And now, Terran, you die.

Zurakh: There is no escape, Terran.

Maverick: I got you, Clipper, you're okay.

Maverick: The transports are secure on this side. Take those Kilrathi out before they can break through.

Grunt: Understood, the fur will fly.

Maverick: Eject, Payback, get outta there!

Payback: No, I can make it back. Get 'em for me, Maverick.

Maverick: Two down, two down!

Ops Officer: Tiger's Claw, this is Suffolk. We are under attack and have been hit. Where are your fighters?

Zurakh: Zurakh to all fighters. Withdraw to maximum sensor range. I'm returning to the carrier to rearm.

Comm Tech: The Suffolk has been secured, sir. The fires are out and casualties have been transferred to our sick bay.

Tolwyn: Get repair parties aboard. I wand the Suffolk under her own power in two hours.

Tolwyn: In my quarters, Cadet, now.

Tolwyn: I don't want to hear excuses. You neglected your mission to go off after Kilrathi fighters.

Maverick: Out screens were clear, sir. THhy showed no fighters near the fleet when the transports were hit.

Falcon: At least aboard the old Trafalgar we didn't have to fight alongside pilots who were still learning to fly. (laughs) I guess standards at the Academy aren't as high as they used to be.

Maverick: Are you sure you did a sensor scan before you hit that Kilrathi transport>

Maniac: (sighs) I know my job.

Maverick: (sighs) Easy checked his screen too? It couldn't have been a malfunction?

Maniac: Oh you want to believe me now, don't you? Now that you're trying to get yourself off the hook for letting the cats whack those transports.

Maverick: I think the Kilrathi may have something that can't be picked up by our sensors.

Maniac: Did you tell that to Tolwyn?

Maverick: Ah, he wouldn't listen. He says the Kilrathi don't have the technology to beat our sensors.

Maya: The old man's right, you know. The Confederation's been trying to develop a stealth ship for years. If the cats could do it, we'd all be toast.

Maverick: Hmm. What if this one is a prototype? The first one, being combat tested?

Maya: We'd have no defense, we'd lose the war. Somebody better take it out before the furballs find out it works.

Maniac: We got a plan but we can't tell Tolwyn about it. He's grounded both of us.

Maya: Why are you telling me this?

Maniac: We need your help, Maya. We want to use this transport as bait.

Maya: If you're wrong, we'll be in the brig until we're old and gray. But a Kilrathi stealth fighter... that's a big fish you're after.

Kirnok: This is the final test. If you are successful it is only a matter of time until the Terrans are obliterated from the galaxy.

Zurakh: I will bring you a trophy of the Terran's destruction.

Kirnok: I personally will lead your fighter escort. At such a proud moment, a member of the Emperor's own Kiranka clan should be present. If anything should go wrong, the Strakha should not be allowed to fall into the hands of the enemy.

Zurakh: You dishonor me by reminding me of my duty.

Kirnok: I will say no more.

Guthrig: Each of us faces an invisible enemy. One that's always capable of destroying us. That enemy is ourselves.

Tolwyn: The cadets all hate you, you know. I'm beginning to understand why.

Guthrig: Our most dangerous enemy is pride. People willingly destroy themselvs and others to protect that pride. It's pride more than anything else that makes people become a soldier.

Tolwyn: Don't psychoanalyze me, Doctor, I'm not on your couch.

Maniac: I can't believe this was your idea. I always thought you were Tolwyn's pet. That's what everyone says.

Maverick: Hmm. Everyone says you're an arrogant j erk.

Maya: We got an overload in the main fuel cell. Everyone out of the ship, now.

Tolwyn: Cut her loose. Helmsman, come about. Put some distance between us and the Suffolk.

Maniac: You know if this doesn't work we'll both get busted out of the Academy.

Maverick: (laughs) If this doesn't work, we won't be coming back.

Maverick: This better work or it's going to be a short trip. Maya, you're a genius. Now all we have to do is wait.

Zurakh: One of the Terran transports has fallen behind. Hold your position while I destroy the straggler.

Kirnok: Destroy the Tiger's Claw first, then the transports will be at our mercy.

Zurakh: I will choose my own targets.

Maverick: As I recall, you said you'd never fly as my wingman.

Maniac: Hey I'm not, you're my wingman.

Maniac: Woah, I think the pussycat took the bait!

Zurakh: A good end for any ship.

Maniac: I see you furball, hah! I lost him, I lost him.

Maverick: Got his visual again again. He's mine!

Zurakh: This is Zurakh. I am under attack. Shields failing.

Sensor Tech: Sir, the Suffolk, it's blown up. And I'm showing two ships firing at... at nothing.

Tolwyn: No, there's something there. If my pride had let me see it. Launch fighters.

Maverick: Don't let him lose us!

Maniac: I'm on him. This furball's going nowhere.

Maverick: You've had it, pal. Surrender your ship.

Zurakh: You will have no trophy from my defeat.

Maniac: Maverick, you still in one piece?

Maniac: Hey, I'm the leader, remember? And I don't leave my wingman. Woo-hoo! Alright, go get 'em, yeah, tear it up.

Grunt: You owe me one, Maverick! Grande!

Tolwyn: I was wrong when I refused to believe the K ilrathi had a stealth fighter. But the fact that i was wrong is not a license to disobey orders.

Maverick: Sir, what are you going to do?

Tolwyn: Do with you? If you had captured the stealth fighter intact I suppose I would have given you a medal but... since you didn't, perhaps it's best we forget about the whole thing. I'm afraid none of us have done anything here to be proud of.

Archer: I don't always approve of the way you fly, M aniac. But I should've knonw you'd never sacrafice your wingman. You're a good pilot.

Maverick: When did she join your fanclub?

Maniac: (laughs) Well, she wanted to say I'm the best, but she didn't want to hurt your feelings.

Maverick: (laughs) In your dreams. You know we make a pretty good team. Maybe we should work together more often.

Maniac: Sure, just let me know any time you want me to save your tail.

Maverick: Or maybe I'll save yours.