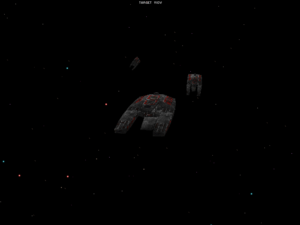 You've probably heard on the grapevine that we've got Ronula Smitts in custody, a former Kindred operative who is about to spill his guts on certain Kindred operations. He is currently in transit between Tersa (Nav 147) and Hades (Nav 6) We need you to meet up with the transport at Nav 147 and escort him to Hades. The Kindred want this guy dead so keep your eyes open.

Escort a cargo ship transporting Ronula Smitts from space station Tersa (NAV 147) to Hades (Nav 6). Watch out for the Kindred.