Red and Blue is the first episode of Wing Commander Academy. 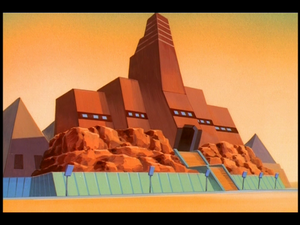 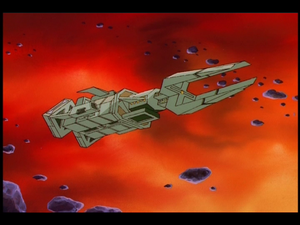 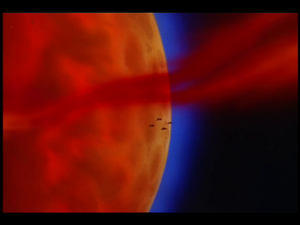 Maniac: Sure Maverick, tell us something we don't know.

Maniac: You should've stayed with your ship, Archer

Maverick: Well, we're the only ones left. I'm your wingman, Maniac.

Maniac: (laughs) You think you can keep up with me.

Maverick: Hey, I hope you're not thinking about taking on that carrier.

Maniac: Well, in the words of John Paul Jones, I have not yet begun to dogfight. Hey, what happened! I was going to get that carrier.

Maverick: Yeah? You were about to get your atoms dusted across space. What you did in that simulation was against every flight reg in the books.

Maniac: No book ever destroyed a Kilrathi carrier.

Instructor: All right fall in, cadets. A computer glitch shut down the simulation. Lucky for you Maniac. As soon as the problem's corrected we'll have playback and analysis of the exercise. Get on it Burroughs, I want that computer online ASAP.

Maniac: Try to get it right this time.

Maverick: It always reminds me of why I came to the Academy, to fly.

Viking: What do you think it's like up there? In a real fight, I mean.

Maverick: I guess we'll find out. But we're being trained by the best. We'll be ready when the time comes.

Viking: I wish I had your confidence.

Maverick: Yeah, well... uh, listen, I was wondering if maybe we coudld get together sometime. Maybe study for our Kilrathi psychology exam.

Viking: I like to be called Victoria, when I'm on my own time.

Maniac: Hey Maverick, I was about to prove who the best pilto is when that simulator shut down.

Maverick: Oh yeah? The best pilot is the one who completes his mission and comes back alive.

Maniac: (laughs) Come on, you know you want to be Wing Commander. You're just too busy being a perfect little cadet to admit it.

Maverick: I wouldn't do that if I were you.

Maniac: (laughs) So what are you going to do about it? Huh? Come on, let's just have it out right now, you and me.

Maverick: You know that's against the Academy rules. Hey, I am not going to fight you.

Archer: Chill out, Maniac. You want to get bounced out of the Academy?

Maniac: Butt out Archer. This is between Maverick and me.

Maniac: You must be a lot of fun on a date.

Maniac: Yeah, uh, thanks for the demonstration.

Commandant: Next time, keep it in the gym. Commodore Tolwyn, I apologize for my cadets'... enthusiasm.

Maniac: The most decorated commander in the fleet?

Tolwyn: I thought I'd have a look at you cadets while the Tiger's Claw is being refitted. I'd like to see you in action in space, not in a simulator.

Commandant: They're ready for combat maneuvers in real fighters. We'll divide into two flights, red wing and blue wing, with weapons set at the lowest level. They'll get knocked around a bit but their shields will protect them.

Tolwyn: I'd like to pick the commanders of the two opposing teams. Hmm. You lead the red wing and you'll lead the blue.

Maniac: Well at least we already know who's going to win.

Blair: Dad, I know you and mom disagreed with my decision to come to the Academy but I just wanted to let you know I've been studying hard and well I think I'm doing well here. My callsign is Maverick. (laughs) One of the cadets gave it to me as a joke, I sort of have a reputation for following the rules. Dad, you told me there's no glory in war, and I'm not saying you were wrong. But to willingly take on a hard and dangerous job, to give your best in the company of the best, surely there's some glory in that.

Burroughs: The deals have changed. If you want the Academy's classified files, you'll have to take me back to Kilrah with you. It's only a matter of time until they realized someone's copied the files and trace it to me. I'll rendezvous with you in the nebula then I'll turn over the data.

Commander: Transmit now. Academy fighters will overtake you before you can reach us.

Burroughs: No, they'll be too busy with their own problems to worry about me. I've reprogrammed the fire computers on the fighters to full strength. While they think they're having their mock combat, they'll be blowing each other to bits.

Maniac: Hey Maverick! You got the nerve for a little one on one? Just you and me. We have our teams hold position while we meet for a private dogfight. With all the interference in that nebula the Aacademy brass weill never know. It's the only way to settle once and for all who's the best pilot.

Maverick: What do you have teo do to get through to this guy? We're not playing games. You're on, Maniac!

Maniac: (laughs) Allright! May the best pilot win. That'd be me.

Maverick: Maverick to Viking. Switch communications to tac-two and scramble.

Maverick: Viking, I'm making you second in command of the blue wing. With your help I'm going to each Maniac a lesson he'll never forget. I'm meeting him for a one on one inside the nebula. His approach vector will shjow the location of the red wing. I'll transmit the coordinates to you. I'll keep Maniac while you lead a surprise attack on the red wing.

Prince Thrakhath: Perhaps our spy isn't as clever as he thought. Monitor the situation. Be prepared for teachery. But whatever the danger to you and your crew I will have those Academy files. That information will render their fighter squadrons useless. We will sweep them from space. Get me those files.

Maverick: Maniac, where are you? It's just like you to be late.

Maverick: Give me a vector on Maniac's ion trail. Got it. Transmit data to Viking on tac two.

Viking: We've got the approach coordinates for the red wing. Let's go.

Commandant: We'll monitor the exercise from here, tally hits and tell the cadets when they've scored kills. At the moment the blue team is on an intercept course for the red. We've lost contact with the team leaders. Huh. They must have gone on a reconnaissance and flown too close to the nebula.

Instructor: Yeah. Maniac and Maverick were interesting choices for team leaders. They're good pilots but they're very competitive.

Tolwyn: I know, that's why I chose them.

Maniac: Come on out, Maverick. You can't hide from me forever. WHat are you, afraid to face me? Maybe your callsign should be Chicken instead of Maverick. (clucking)

Jazzman: Incoming target. Could be Maniac but there's too much interference to be sure.

Jazzman: Woah! What, what was that? Oh. Man, this is too real. Jazzman to Archer, these lasers pack quite a punch.

Archer: She's on my tail, I can't shake her.

Jazzman: Hang on Archer, I'm on my way.

Archer: Fighter has been destroyed. Weapons are at full strenght but shields register no damage.

Tolwyn: This is Commodore Tolwyn. All fighters return to the Academy immediately.

Tolwyn: I repeat, return to the Academy immediately.

Archer: You take the others back, Viking. I've got to find Maniac and Maverick. They won't be able to hear the recall message inside the nebula.

Maniac: Where'd you go, Maverick? (laughs) You're not getting away that easy. Hey! Watch it! You're the one that's supposed to be getting your lumps.

Commander: Did you bring the data?

Burroughs: (laughs) I'd have to be pretty stupid to show up here without it.

Commander: I have never met a spy before, face to face. How does your honor allow you to betray your own people?

Burroughs: Honor? I want revenge! I was a cadeet at the Academy until they washed me out. Who are they to tell me I'm not good enough to be a pilot? All the work I put in. And then one bad psych evaluation and it's all for nothing. Unstable? Hah, what a laugh!

Burroughs: What are you doing? We had a deal! A deal! (screams)

Commander: A man without honor has no reason to live.

Archer: There are two ships out there but I can't tell who they are. It's gotta be Maverick and Maniac. Oh my... Kilrathi.

Maverick: Maniac, hold your fire. There's something wrong with my shields.

Maniac: Oh ha ha, boo hoo. Nice try Maverick, but I'm not falling for it. WHo's the best, Maverick? Who's the best?

Commander: I want the Terran ejection pod found and destroyed.

Archer: Negative, Maniac, there's Kilrathi everywhere. No matter what your instruments say your weapons are at full strength.

Maniac: (laughs) Oh man, we could've really found out who's the best.

Maverick: Hey, get a grip pal, this isn't a game.

Archer: Maverick's right, One shot from the Kilrathi's cap ship could blow you to bits.

Maniac: Well then we'll just have to get the furballs first. What do you say, Maverick?

Archer: Gotta buy some time for Maniac and Maverick. Well, here goes nothing.

Thrakhath: Why has the Academy data not been transmitted to me? Begin transmission at once!

Archer: Yes, you got it! Your first Kilrathi ship.

Maverick: Yeah, right, and our last one. There's no way we can keep the Academy brass from finding out about this now.

Commandant: You got away with it this time, but next time you go off to fight your own private duel bagging a whole Kilrathi fleet won't keep you in the Academy. (sighs) You're not my problem anymore.

Tolwyn: The brass hats at fleet headquarters decided you cadets need hands on training. You'll be under my command aboard the Tiger's Claw. You'll finish your training and fly patrols in our assigned sector. If you're lucky, you won't even see a Kilrathi ship. You've got one hour to pack your gtear and report to your fighters for transfer to the Tiger's Claw. Dismissed.

Maverick: The best carrier in the fleet.

Commandant: Geoffrey, we've known each other for a long time. Why did fleet command give you this assignment? You should be an Admiral by now instead of babysitting a bunch of cadets on a training patrol.

Tolwyn: Fleet command is trying to teach me a lesson. I won't fight the war their way so they're going to keep me out of combat. Apparently the Kilrathi aren't my only enemies.

Commandant: Don't take it out on the cadets, Geof. It's not their fault.

Maniac: Hey Maverick. Oh, it's not over between us. I'm still a better pilot than you and I'm going to prove it.

Maverick: Why? You're a good pilot.

Maverick: That wasn't your fault.

Viking: The way I felt, it would've been the same against a Kilrathi pilot. They're the enemy but they're living beings too. I can't take that away from anyone, even the enemy. Are you going to stay?

Maverick: I can't let someone else take my place. I knew the risks when I chose to be here.