The Rec Room was a lounge area aboard the TCS Tiger's Claw. Pilots often frequented the rec room between missions telling war stories, trading flying tips, and just blowing off steam from their hectic lives.

The Rec Room's bar was ran by former Tiger's Claw pilot Sam, who not only provided drinks but was also a fount of useful information to those willing to listen.

Other amenities of the Rec Room included a Trainsim for pilots to brush up on their piloting skills between missions and a killboard to keep track of the number of missions and kills for each pilot. 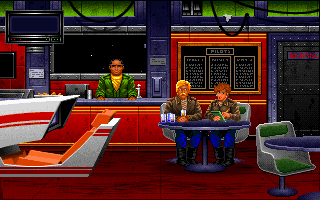