Petra is little more than a large asteroid. However, the high-grade mineral deposits located just beneath its meager crust have attracted a population of just over one million, with most working in mining and support industries. 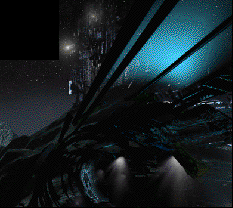 BACKGROUND:
Petra is more like a large rock than a planet. It has no atmosphere and, had it not been for its high concentration of minerals, would have been left to its own devices. In the last census there were 5,654 different mining operations at work on this hostile outpost, employing a work force of just over 1 million. The ores from Petra are exported all over the Confederation where they are refined for many different uses from building materials to fuels. Environmentalists, however, believe that Petra is a time bomb waiting to explode. Due to over mining, they believe that not only will the planet be stripped of all its resources inside of 50 years, but that it will soon not be able to support its own crust.