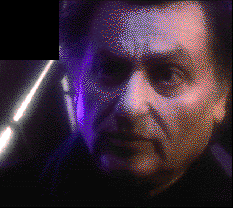 BACKGROUND:
Although a legally-appointed bailiff, rumour has associated Ramirez with a number of legally dubious repossesions, and he is suspected to be a 'debt-collector' affiliated to the lower levels of the Kindred. CIS agents have been trying to bring him in for questioning for some months now, but he has recently disappeared, perhaps indicating the often lethal consequences of mixing with the Kindred.
Criminal Record: None