Lancelot Flight was a covert mission conducted by the Terran Confederation on 2669.267. Its main objective was the destruction of the Kilrathi homeworld of Kilrah, and would be the final major combat operation of the Terran-Kilrathi War.

By 2669, the Terran Confederation had been fighting the Kilrathi Empire since 2634. However, in the aftermath of the Battle of Earth on 2668.365, humanity was on the brink of defeat as its fleet had suffered tremendously and billions of lives had been lost in the Kilrathi offensive. Throughout 2669, the Confederation suffered numerous setbacks and its territories on the frontier were rapidly being absorbed by the Empire. The situation had become so dire that Confederation High Command predicted total defeat by the year's end, if not sooner. Desperate to end the war, the Confederation looked to several covert operations that had been under development for years.

The first plan implemented by the Confederation was to use the TCS Behemoth, a massive dreadnought with the ability to destroy an entire planet with a focused energy beam. The Behemoth ended in disaster when Colonel Ralgha nar Hhallas, a Kilrathi sleeper agent, relayed intelligence about the weaknesses of the weapons platform to the Kilrathi . The Behemoth was destroyed in Loki System before it could be deployed against Kilrah.

The Confederation Special Operations Division revealed its plans for the deployment of the Y22A-1 Temblor Bomb, a tectonic frequency warhead that could destroy planets by destabilizing its tectonic plates. Colonel Jeannette Devereaux and her Special Operations team infiltrated the Kilrah system using a captured and heavily modified Kilrathi freighter in early 2669. Their mission was to chart a previously unknown jump point and survey the tectonic stability of Kilrah. They deployed three Theta-Class supply depots in system, two in asteroids and one on the second moon of Kilrah, Largkza. The Largkza depot had a cache of two Temblor bombs onboard as well. Devereaux's team weas later captured by the Kilrathi after having completed their mission. Colonel Devereaux was personally executed by Crown Prince Thrakhath and her team was disintegrated in the Throne Room of the Imperial Palace after their interrogations.

Brigadier General James Taggart arrived in the Blackmane System on 2669.251 aboard the escort carrier TCS Eagle. He transfered to the Victory from the escort carrier on a shuttle named Armstrong. After encountering Colonel Blair briefly on the flightline, General Taggart briefed Captain William Eisen on the Temblor bomb project. Later that same day, Taggart briefed Col. Blair and Chief Tech Rachel Coriolis on Col. Jeannette Devereaux's mission to the Kilrah system and the Temblor bomb project. Taggart also recounted the attempt by the Eagle to penetrate the Kilrah system during the TCS Behemoth`s short operational life. The Eagle`s captain had been persuaded by General Taggart to attempt a unsanctioned strike on the Kilrah system while the Kilrathi were occupied with the Behemoth. Thrakhath's intelligence on the super weapon proved to be its demise and the Eagle met stiff resistance as well as suffering heavy damage long before it reached the Kilrah system. The Eagle was forced to turn back. Following the loss of the Behemoth, Sector HQ authorized a Temblor bomb strike on Kilrah. Now a fleet would support the strike force.

After rescuing Dr. Severin from a year-long stay in a Kilrathi prison on Alcor V, the doctor was able to properly assemble a Temblor bomb for an operational test. A Temblor bomb was then successfully tested in Hyperion on 2669.262 by Colonel Blair in a modified-F-103 Excalibur. The Victory Battle Group was moved into strike position in the Freya System after the test. An atmospheric strike by Colonel Blair destroyed a shield generator on Freya II that protected a jump point to Kilrah. Lancelot Flight could now be launched on the final strike.

Lancelot Flight was to be launched by the Victory Battle Group on 2669.267 from the Freya System. Freya held a key jump point that led directly to Kilrah. After the successful offensive into the system, where Colonel Blair destroyed the planetary-based shield generatora Confederation fleet secured the jump point. The Terran fleet was also to draw the attention of the Kilrathi Grand Fleet to prevent its interference in the forthcoming Temblor strike.

Christopher Blair was to command the flight and his choice of three wingmen: Major Todd Marshall and Lieutenants Winston Chang and Robin Peters. The flight was to use F-103 Excaliburs, the most advanced heavy starfighter in the Confederation arsenal. The fighters would be equipped with the XSJ-A Shroud Ladar/Radar Jamming Device, the Confederation's first operational cloaking device. The device was a serious power drain making it unstable as well. It was to be used sparingly during the mission. 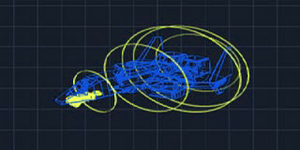 As Lancelot Flight prepared for its final mission, Crown Prince Thrakhath nar Kiranka was overseeing the assembly of the Kilrathi Grand Fleet. This massive fleet was to smash through the remaining Confederation forces and destroy the Terran homeworld of Earth. The Grand Fleet was to commence its final campaign in less than forty-eight hours time.

On 2669.267, Lancelot Flight was launched with Colonel Blair in command. Major Todd Marshall Lieutenants Robin Peters and Winston Chang were the other pilots in the strike. Upon departing the Victory in Freya, the wing cloaked and jumped into the Kilrah System, de-cloaking to engage the numerous Kilrathi patrols they encountered on their way to the first depot, TCS Chinook. Among the warships encountered by the flight were Ralarrad and Ralaxaths, and several wings of starfighters. Despite the opposition from the Kilrathi, Lancelot Flight managed to fight them off however Winston Chang was forced to eject when two Darkets attacked his fighter. He was later rescued and survived the war. The remaining Excaliburs proceeded to the first depot in a nearby asteroid belt. The terrans refueled and re-armed at the depot and soon afterwards departed for the second facility near Kilrah. After again being met with fierce enemy resistance including the cruiser KIS Kheerakh, Blair was forced to head directly for the third depot on Largkza. The KIS Kheerakh destroyed the second depot, TCS Altair, before investigating it. This denied the Kilrathi any more intelligence related to the strike force. All three Excaliburs landed at the third depot and prepared for the final phase of their mission.

The three pilots assembled and loaded a single Temblor bomb onto Blair's Excalibur. Blair wanted his two wingmen to escort him to the target while he made the attack run. General Taggart had a final prerecorded briefing for the strike team.

"This is the final briefing, laddie. By now you've finished loading the T-Bomb, and you're ready for the final phase of the mission. I pray to God you can carry it out. If you canna do it, I dinna ken who can. You are looking at your target, a deep natural canyon that goes down nearly a mile. It was formed by one of the most active fault lines on the planet. If our calculations are correct, this point, here, near the northern end of the canyon, is critical. Three faults come together at this one point, and if the Temblor Bomb is detonated there it should set up a chain reaction of quakes that will devastate Kilrah. Lay it in there sweet and easy, laddie. The exact coordinates are already preprogrammed in your flight computers. To make the run, though, you'll have to descend into the atmosphere, into the canyon itself, and drop the bomb on the target. Because you'll need your shields to handle a high-speed atmospheric insertion, you'll have tae go in the last stretch without your cloaks. It'll be dangerous… but if you move fast and hit hard, you'll have a chance. Its almost over, laddie. You and your people are the best for the job, and I know you'll do Terra proud. You'll be in my prayers, all of you. Good luck.

The three terran pilots manned their fighters and prepared for the final phase of their mission. Prince Thrakhath was alerted to their presence close to Kilrah and scrambled all available interceptors including his own Blood Most Noble Squadron from his flagship, the dreadnaught KIS Hvar'kann.

During the approach to Kilrah the three terran pilots encountered Prince Thrakhath flying his personal Bloodfang fighter and numerous other interceptors. Robin Peters was shot down by Prince Thrakhath after having shot down a Vaktoth. After entering Kilrah's atmosphere, Major Marshall engaged two Vaktoths and was able to destroy one before turning to chase Prince Thrakhath. Thrakhath was preparing to engage Colonel Blair's Excalibur when Marshall launched two missiles at Thrakhath. The remaining Vaktoth inflicted fatal damage on Marshall's Excalibur forcing Maniac to eject. He was later captured and harshly interrograted by the Kilrathi before being given a ceremonial release. Colonel Blair killed Prince Thrakhath with the aid of Marshall's missiles, watching as the Prince's fighter crashed into the surface of Kilrah. Colonel Blair then descended into the trench leading to the fault line for the final attack. After a short flight, he released the Temblor bomb. This began the massive chain reaction that would literally shake Kilrah apart.

The Destruction of Kilrah 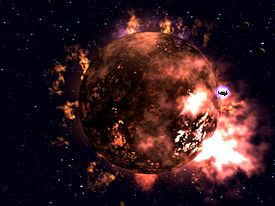 As Colonel Blair fled the planet at top speed, the Temblor Bomb detonated, setting off massive shock waves across Kilrah. In the wake of the blast a cataclysmic earthkquake raged across the entire planet, killing billions of Kilrathi on the surface. The Imperial Palace was destroyed. The Kilrathi Emperor was killed inside.

In Kilrah orbit, the Kilrathi Grand Fleet fell into total chaos as the planet below tore itself apart. A large part of the Kilrathi fleet were destroyed by the shock wave and ejected debris while the few survivors attempted to flee. As Colonel Blair reached space, a wave of energy slammed his fighter with terrific force. The shockwave disabled the Excalibur however it soon encountered a Kilrathi dreadnaught.

Colonel Blair and his fighter were located and tractor beamed aboard the KIS Hvar'kann, the Crown Prince's flagship which barely escaped Kilrah's destruction. On board, Blair was brought before Thrakhath's retainer Melek, who wished to take revenge on the "Heart of the Tiger". However, seeing nothing but shame in killing the one Terran who could destroy the Kilrathi, Melek personally surrendered to Colonel Blair, declaring that the Kilrathi were "a beaten race."

In the immediate aftermath of the Lancelot Flight, the surviving members of the Kilrathi Empire sought to establish peace with the Terran Confederation, and in a momentous signing in the Torgo System, Terran and Kilrathi representatives, among them Melek and Admiral Geoffrey Tolwyn signed the Treaty of Torgo formally ending the thirty-five year Terran-Kilrathi War.

Colonel Blair was released by the Kilrathi and retired from active service to Nephele II with Chief Tech Coriolis, whom he had married following the war. It was later found that two of his fallen wingmen had survived, Todd Marshall and Winston Chang, both of whom remained on active duty. Tragically, Robin Peters was killed during the mission.

The loss of Kilrah effectively ended the Kilrathi Empire. The remnants of the Empire instead fell into civil war as the quarreling clans fought for control, leading to years of in-fighting in Kilrathi space. The Kilrathi Assembly of Clans was established by Melek, however many Kilrathi oppose his presumption of a leadership position.