The Kamrani-Class Corvette is a warship that saw extensive use with the Kilrathi Empire during the Terran-Kilrathi War. 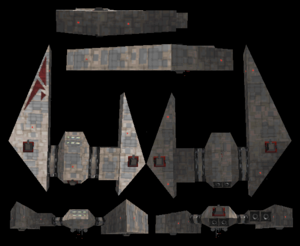 The Kamrani-Class Corvette is a light capital ship that entered service during the second half of the Terran-Kilrathi War. Its main roles were convoy escorts, system patrol, and anti-starfighter defense. Many of these ships were seen escorting supply convoys and heavier capital ships like the Ralarrad-Class Light Destroyers throughout the Kilrathi War. Although a relatively small warship, it posed a dangerous threat to enemy starfighters.

At least one Kamrani aided in the failed invasion of Tamayo II and a pair of these vessels attempted to intercept the TCS Behemoth prior to the destruction of Loki VI. In another engagement, three of these corvettes attacked the TCS Sheffield in the Alcor System after the Behemoth was destroyed in the Loki System.