A versatile mechant's vessel, the Galaxy is perfect for those with an entrepreneurial spirit. She is by no means a military vessel, but a Galaxy can usually protect herself and the large amount of cargo she's able to carry.

Cockpit. This large, roomy cockpit offers decent visibility despite the bulky ship behind it. Some pilots may take a while to adjust to the limited HUD area,. Unlike most modern ships, the Galaxy's HUD is not built into the main window. Instead, it is suspended above the MFDs in front of the window. Dual MFDs have been standard since the 2669 model and are a popular feature (see illustration). All displays are conveniently placed for ease of use.

Speed/Maneuverability. Supports up to a Level 3 engine upgrade. For a ship of its bulk, the Galaxy is extremely maneuverable, although not as fast as we would have hoped.

Ordnance/Protection. Due to the large size of this ship, it is able to support both top and bottom turrets. Shield Level 3 is the maximum supported by the Galaxy. Without turrets, there are slots for only two guns and two weapons or tractor beams.

Overall Performance Rating. The Galaxy is successful in its role as the top-of-the-line mercantile vessel available to the public. I give it an A without reservation. Trigger-happy pilots are a little disappointed in its moderate top speed, but the availability of two turrets adds a comfortable measure of safety. 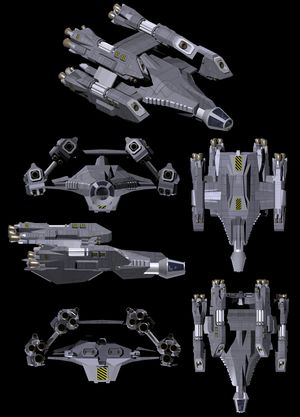