Last week, we decided to spend some time looking into the details of how some of Privateer's gameflow systems work. One of these was the Repair and Upgrade bay screen, which displays a unique render of your ship that can change based on your purchases. Four types of upgrades can make visible changes to your ship: sensors, engines, weapons and guns. The game stores these in a sort of 'paper doll' which pastes the appropriate graphic over the base image of an empty ship. Other upgrades, like turrets or repair droids or shield generators, do not alter the appearance of the ship. Righteous Fire does not add any new graphics to this system: the higher engine upgrades repeat their previous highest settings and the fusion cannons reuse the plasma gun art. 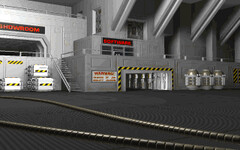 As we extracted all of the game's component graphics, we made a fascinating discovery: the Centurion had not the available two but four upgrade graphics for each of its weapons. That is, there were two extra 'outer' mounts capable of carrying torpedo launchers, missile launchers or tractor beams. This indicates that the Centurion was once intended to have four weapon slots instead of two which would have likely significantly impacted late game balance. The fact that these graphics made it into the final game further suggests that this change was made very late in the balancing process. Many 'cut' Privateer weapons and ships have been discovered over the years but very few are referenced in the game itself because the reality of shipping on 3.5" disks meant the team had to be very careful about every single bit. Freeing these six extra postage stamps would have been welcomed! 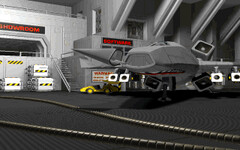 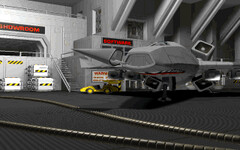 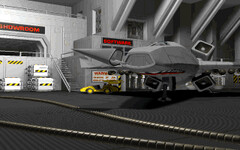 Additionally, we learned that the Centurion has only one visual engine upgrade, despite the base game allowing for up to three. This was likely another late change in the other direction, with the designers deciding to offer Centurion pilots more power than had been initially desired. Eagle eyed Privateers will also note that there's a hint of these late missile changes in the game itself: when mounting a launcher on your Tarsus you are offered the "port" or "starboard" slots while mounting one on the Centurion (or Galaxy) lists "inner port" and "inner starboard" as the options. 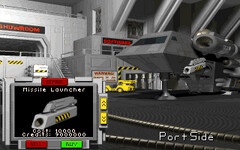 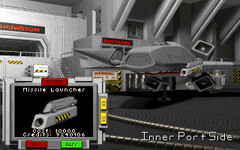 Interested in getting a closer look at Privateer's ship upgrade graphics? We've collected every single one here. One last fact: the reason the yellow car is part of the ship doll instead of the background was because the game originally planned to include an animation where your craft was towed into place. Like a lot of content designed for the game this was ultimately cut for disk space. Just think what Privateer could've been like if it had shipped a year later on CD-ROM! 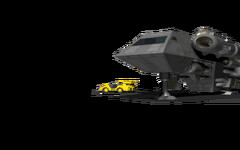 I once had an old manual that indeed showed, that the Centurion had 4 weapon slots. There were black/white cockpit ingame screens that confirmed exactly what the above pictures showed. The Centurion had one tractor beam, one proton torpedo launcher and two missile launchers. But I'm afraid, I don't have this manual anymore.
A friend of mine, whose father visited Hong Kong from time to time... brought this black/white copied manual along with the game on floppy disks. What a pity, that I threw it away after getting Privateer on CD with a new printed manual (that didn't have those "errors"). Yeah, I was young and stupid. Now, I'm only stupid 🤪 ... and not young anymore.

Interesting! Sounds like another indicator that this change was made very late, similar to the removal of the null-g bomblets in Wing Commander Prophecy (which were still included in the Asia-Pacific release of the manual because it had gone to print soone there).

That's the manual I had. I remember reading it before heading home with the game but it never showed up in the game itself. I assumed it might have just been for 'flavour', but of course I understand some things get cut.

As for the Privateer discussion, I'm not sure I ever noticed the 2 vs 4 weapon slot thing (I tend not to use limited-ammunition weaponry so much, because of the cost). That's an interesting find, but I can imagine 4 weapon slots would be rather over-powered for an already very combat-oriented player ship.

Wedge009 said:
As for the Privateer discussion, I'm not sure I ever noticed the 2 vs 4 weapon slot thing (I tend not to use limited-ammunition weaponry so much, because of the cost). That's an interesting find, but I can imagine 4 weapon slots would be rather over-powered for an already very combat-oriented player ship.
Click to expand...

That was exactly what I thought in the past, when I played the game.
I've already started with more expensive guns and two proton torpedo launchers (because they did more damage than missiles and were cheaper).

Anyway... I later found out, that if you had two missile launchers with exactly the same ammunition (in my case then: 20 IR missiles)... then you just track the enemy and push the fire button a bit longer. Then two missiles are launched immediately, which is enough for a Talon.

I don't recall using the proton torpedoes much. Do I recall correctly that they are unguided munitions? That may be why they are cheaper than (guided) missiles yet are rated for greater damage potential.

Heh, enough for a Talon and a Steltek derelict...

Yes, the torpedoes were unguieded munitions. When I was younger (back in 1995) I often used the torpedoes, but as I'm getting older, I'm getting slower and more nervous and so it's a good thing to know that you can easily kill 5 Talons with your missiles if you're under pressure in an asteroid field. I don't know if you already knew this... but the GOG manual and Privateer reference guide (here on page 5) show a Centurion with three weapon systems. That's not the aforementioned four systems but at least one more than in the final game. Of course the Centurion weapon layout is wrong for the Orion cockpit... but still... it confirms once more that the Centurion did not just have two systems in early game state.
You must log in or register to reply here.
Share:
Twitter Reddit Pinterest Tumblr WhatsApp Email Share Link
Top