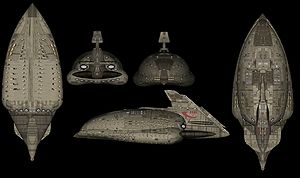 The Sivars were a family of dreadnoughts manufactured by the Kilrathi Empire since at least the 2500s.

The first Sivar-class dreadnoughts entered service before the beginning of the Terran-Kilrathi War. Notoriously fast for a battleship, the Sivar-class could deliver a large amount of soldiers and munitions into battle quickly. For that reason, Sivars served as the centerpiece of nearly every Kilrathi task force through to the end of the Vega Sector Campaign. Over 700 were produced. The Terran Confederation managed to capture several original Sivar-class ships, including an unarmed ship in dry dock during the Epsilon Initiative. All Eight Noble Clans build and staff Sivar-class ships.

A notable variant of the Sivar-class design is the Sivar-class ship which destroyed the Goddard Colony. Armed with an experimental Proton Accelerator Gun, the Sivar and her support fleet crossed the border and completely destroyed the human colony. The TCS Tiger's Claw pursued the ship and her fleet, eliminating them all in daring act of vengeance. During a series of secret missions, four Bengal carrier groups attacked and destroyed the shipyards which produced the weapon.

A third Sivar variant, based on the hull of the colony-destroying weapon, served as a pocket carrier in limited roles.

The Sivar class is believed to predate the Terran/Kilrathi conflict. It is the premier main battle ship in the Kilrathi Fleet, and a Sivar can be found at the heart of almost all Kilrathi task forces. More than 700 distinct Sivar-class vessels have been identified in action. It is the closest thing the Kilrathi have to a carrier in the Confed sense of the term, and carries hangar space for up to 150 fighters. Its missile capacity, by contrast, is rather limited,and is confined mostly to ship-to-ship torpedoes.

The Sivar class has exceptionally powerful impulse engines, making it the fastest large battleship currently in space. This speed, combined with its copious and efficient carrier capacity, provides its major strategic asset; the Sivar class can move quickly into position and launch a fighter strike on its objective, then move rapidly to a new assignment.

The Sivar class is believed to require a crew of 300, plus an additional 300 warriors for fighter and marine operations. The configuration and capacity of the Sivar class is quite well known, due to the fact that several have been captured largely intact over the years (most notably, an unarmed but otherwise completely functional ship taken in dry-dock early in the Epsilon initiative). Sivar-class warships have been observed with the markings of all the major clans, but increasingly they're being disproportionately seen with imperial clan markings, indicating the ongoing centralization of strategic forces under the Emperor himself.