The Plunkett class Cruiser was a class of Confederation capital ship that was in service during the Nephilim War. These cruisers were designed to provide significant support for both offensive and defensive actions.

During the events of the Nephilim Incursion into Sol Sector, Murphy class destroyers and Plunkett class cruisers were instrumental in mounting a rapid defense of the sector. The heavy firepower of this cruiser class in combination with its fighter complement were effective but not infallible in engagements with Nephilim destroyers, cruisers, and their fighter complements.

As a result of the assistance of Plunkett class cruisers and Murphy class destroyers, the TCS Cerberus was able to defend multiple systems within Sol Sector and eventually assault the Proxima Wormhole gate.

This original design, however, proved inadequate when the TCS Plunkett and her sister ships TCS Cernan and TCS Borman engaged a group of pirate corvettes. Both the TCS Cernan and TCS Borman were destroyed while the Plunkett survived with major damage. The greater of maneuverability of the corvettes prevented the cruisers from effectively engaging the smaller vessels. This weakness resulted in a partial redesign of the cruiser's armament.

This second armament design was implemented on both new Plunkett class cruisers and refitted on those currently commissioned. This design replaced the central missile turrets with a pair of Triple-Mount Heavy Particle Cannon turrets. The combination of four heavy turrets provides the cruiser with significant anti-capship firepower at a greater firing arc. In addition, these turrets can be employed against fighters turning nearby space into a lethal field of large plasma and particle spheres.

For added operational capability, the cruiser is designed to maintain a near full squadron of 15 fighters/bombers. This added functionality enhances the Plunkett's current role as both fleet defender and battleship. 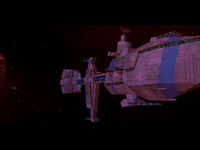 In addition to the efforts of the pilots and crew of the TCS Cerberus, the Ella Starbase and Ella system were defended by Murphy class destroyers and several Plunkett class cruisers including the TCS Tereshkova.

At least one Plunkett class cruiser was destroyed by Nephilim Mantas and a Hydra class cruiser in the Talos system when the TCS Cerberus entered the system.

If Luyten Station is destroyed by Nephilim forces, the TCS Bannockburn is sent into Luyten from Sirius to assist the TCS Cerberus.

If the TCS Cerberus is forced to fall back to Sirius, TCS Adelaide will join it in the assault on the Proxima system.

Shortly after her commissioning, the Plunkett and two sister-ships (Cernan, Borman) were involved in a brief skirmish with a group of pirate corvettes. Through the course of the engagement, the Cernan and the Borman were destroyed as the faster and more maneuverable corvettes repeatedly flanked the two cruisers. The Plunkett was eventually able to force the remaining pirate vessels to disengage, and returned to port with heavy damage. Following this encounter, all the remaining ships in the class were scheduled for refit, which involved removing the two missile turrets, strengthening the pylon and mounting the particle cannons.

Specifications Note: The original layout of the Plunkett class cruisers mounted 2 anti-fighter missile turrets in place of the 2 particle cannon turrets on the center pylon.