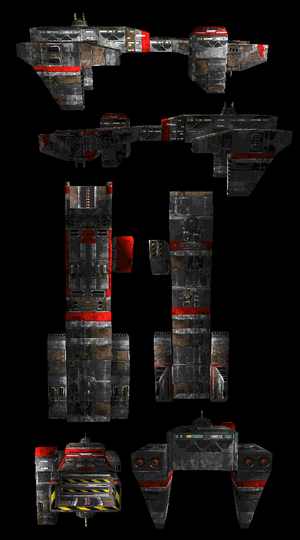 The PR06 is the second most common pirate cruiser in the Tri-System. Belonging to the Papogod clan, the PR06 is their first-line weapon in the ceaseless bloody conflict with the Kiowans. Following an abortive peace talk session, a single PR06 engaged a pair of heavier Kiowas, destroying one and damaging the other before falling itself. PR06es also see extensive service against military targets – more so than any other pirate capital ship. In 2790 the Papogods began a campaign to destroy as many military carriers as possible. A pair disabled the CIS Kaitlin while another destroyed the CIS Whatley and managed to damage the CIS Stryker before being destroyed. They are used for assassination missions, as well: three were deployed to kill Ragnar Dannes, including Papogod Force 75, Papogod Unit 3B and Papogod Unit 54. PR06es are available on the civilian market, as well. Buddy Carlson owned Rarmus One, a Papogod Cruiser he destroyed as part of a battle re-enactment filmed for “Space Jox”.