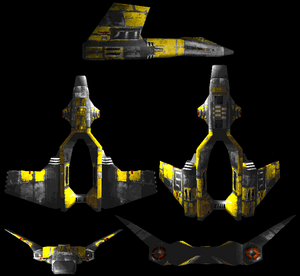 The Testmos is the Chirichan pirate clan’s primary heavy fighter. With their imposing yellow markings and unusual donut hull, Testmoses are one of the most feared pirate fighters in the Tri-System. In terms of pirate ships alone, they are decidedly inferior to the Ashearer-class, but are a step ahead of the Kiowan and Jincilla offerings.

The Testmos has lots of armor and is a medium-to-fast fighter. It may take awhile to run one down and wear out its armor, but it's not impossible.