The TCS Behemoth was a Behemoth-Class Dreadnought operated by the Terran Confederation in 2669. It was the first and only ship of its class, and was designated as a planet killer.

The TCS Behemoth was the end result of the Behemoth Project, a top-secret Confederation military project that was initiated in the late 2650s. The project was led by Admiral Geoffrey Tolwyn during the ongoing Terran-Kilrathi War, with the sole purpose of destroying the Kilrathi homeworld of Kilrah. It was hoped that by destroying their homeworld, the Kilrathi would lose all will and means with which to wage war on humanity, effectively securing victory for the Confederation. 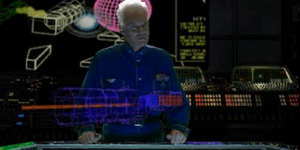 Admiral Tolwyn introduces the TCS Behemoth to the personnel of the TCS Victory in 2669.

The Behemoth took the form of a super dreadnought, and by the time of its completion was one of the largest vessels in the Confederation's arsenal. The vessel was designed as a large series of superconducting energy amplification conduits, focusing 500,000,000 gigawatts against a single point of impact on any target. The target at the end of that point, be it a warship, space station, or even a planet, would be utterly destroyed. 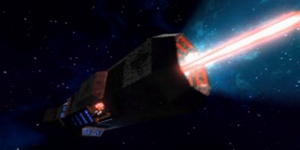 The Behemoth fires on Loki VI while the Victory provides close escort.

The TCS Behemoth was still in its finishing stages of production when the Confederation found itself on the brink of defeat after the disastrous Battle of Earth in 2668. The Kilrathi Empire had renewed its fearsome armada and was encroaching Terran territories all across the frontier. With the constant defeats felt during the course of 2669, it became clear that Earth would likely fall by the end of the year if immediate action was not taken. Thus, the Behemoth was forced to enter service earlier than anticipated. Unfortunately, this rapid activation meant that proper defensive systems, such as keel mounts and laser turrets had yet to be installed. The vessel also suffered some shield weaknesses that left several key areas on the ship particularly vulnerable to attack. Finally, the laser had not been properly tested, forcing the Confederation to test it on the front lines.

Admiral Tolwyn assigned the TCS Victory and her task force the mission of escorting the Behemoth during its test runs against the Kilrathi. Tolwyn himself arrived on the Victory to take command of the operation. On 2669.245, the Victory and her fleet rendezvoused with the TCS Behemoth in the Torgo System, where they were ambushed by the Kilrathi. After driving off the assault and refueling the mammoth warship, the Victory escorted the Behemoth to her testing site in the Loki System, where she was to destroy a Kilrathi outpost on Loki VI. The planet orbited a quasar, which periodically disabled all means of communication, making it an ideal site for a covert test. After pilots from the TCS Victory successfully fended off multiple Kilrathi patrols, the Behemoth fired on Loki VI, completely destroying the planet. With confirmation of the vessel's operational status, Admiral Tolwyn ordered an immediate strike on Kilrah. 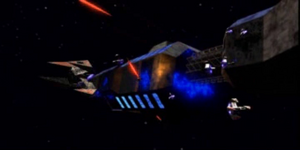 The Kilrathi destroy the Behemoth before it can attack Kilrah.

The attack on Kilrah did not succeed. Kilrathi Colonel Ralgha nar Hhallas, once a loyal pilot of the Terran Confederation, was prompted to betray the Confederation when his personality overlay was removed by rogue transmission from Crown Prince Thrakhath nar Kiranka. He leaked the weak points of the Behemoth to Thrakhath, allowing the Crown Prince to launch a focused attack on the vessel. Colonel Christopher Blair and his wingmen from the Victory fought desperately to save the vessel, but the Behemoth was eventually destroyed after a concentrated attack by Kilrathi bombers, resulting in a heavy blow to the Terran Confederation.

The loss of the Behemoth could have seen the end of Humanity had Brigadier General James Taggart not introduced the Temblor Bomb that would eventually see Kilrah's destruction. After the Kilrathi War ended in a Terran victory, production of the Behemoth was discontinued.