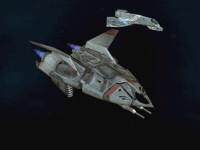 JasonRocZ is soliciting general input on the development of Wing Commander Collateral Damage. WCCD is a mod for Secret Ops that takes place between WCSO and Arena. You've seen a ton of ships modeled for the game, but now's your opportunity to help suggest key features that are important to you. You can post your feedback here.

I'm looking to put together a few ideas for this project. The mod is based on post Secret Ops information, including plenty of info from cancelled projects but also based much on S*S Arena info.

Now what I'm looking for here is information of what "YOU" the fans of WC would "LIKE" to see in the mod and what you would "NOT" like to see. I'm open to anything except truly ludicrous ideas. Think of projects like Standoff, Unknown Enemy - things you liked and didn't like. I'll elaborate as we go on what I'd also like in the project, and you can comment.

So fire away and we'll hit some tail together as fans of a great franchise !