The WC Saga team has released two new and improved cruisers for WC Saga. The first is an upgraded version of the Tallahassee that was originally launched six months ago. The new model has some additional details and a more authentic paint job. It's pretty damn sharp. The second model is a conceptual design based on a lighter cruiser. Psych provides some more detail below. 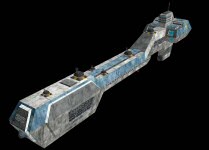 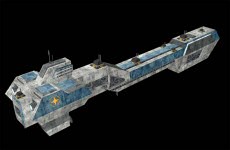 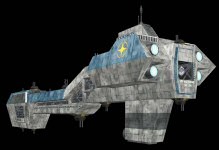 This first ship is our final model of the Tallahassee-class, the Confed heavy cruiser from Wing Commander 3. This gun-heavy warship is designed for slug-fests with other cruisers and planetary bombardment. Weaponry is 4 Anti-Matter Turrets, 8 Laser Turrets, 6 torpedo tubes, and a capship missile launcher. Length is 530 meters and displacement is approximately 18,200 tons.

Credit goes to Michael “Lynx” Lechner for the original model and textures. Anton “Tolwyn” Romanyuk did the final texture correction and technical assistance. The final texture adjustment and additional details was done by Michael “Starman” Pretli. The ship was a bitch to bring online, it was so bug-ridden that it took us literally months to finish. 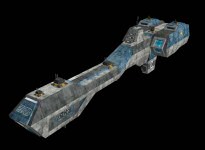 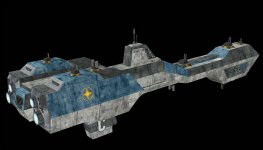 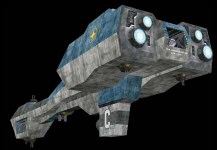 This second ship is a “fill in the gaps” design. Like the Jutland-class carrier, this ship wasn’t seen in the games but was mentioned very very briefly in the novels. It was basically up to the artist to design the blueprints of the ship, but something that involved lots of research so it wouldn’t turn out to be a dissapointment.

This ship is the Savannah-class light cruiser, a ship that is fan designed but has its roots in WC canon. These vessels are supposed to be the light cruisers that were in service with the Confed Navy during the 2669 era, and then were sold to the Republic of the Landerich. The existance of these ships are founded in the WC novels. One is the TCS Andromache, which later becomes the FRLS Themistocles in the False Colors novel; another ship of this class would eventually become the FRLS Xenophon.

Psych did the concept for the Savannah. Lynx and Starman wrapped it up. You can find more information and provide feedback at Crius here.