WC Saga's Tallahassee Class Cruiser slipped through the cracks late last year. It's quite a pretty ship, so we thought you'd all like to take a look. 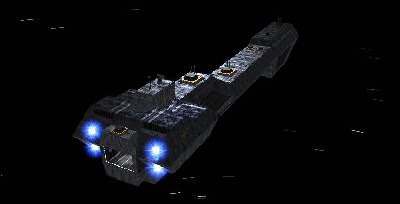 The Tallahassee-class fleet cruiser is one of the new naval designs the Terran Confederation started to produce before the False Treaty was signed. It is a simple and efficient design that has been refined for mass production. To save cost, production time, and complexity, the shipbuilders seriously cut back on the fighter carrying capability which they had incorporated on the Waterloo-class heavy cruiser.

The result is a next-generation Confed cruiser that is more then a match for the Kilrathi’s Fralthra and Fralthi II class cruisers. The Tallahassee-class packs a heavy main battery of AMG turrets and a complement of heavy laser batteries, torpedo tubes, and cruise missiles. There is also a small flight deck to carry up to eight light or medium fighters, and four shuttles. Heavy shielding and armor makes it sturdy and durable during combat.

You can find numerous other designs from this fan project here.