Yet another new feature has been added to the Homeworld Remastered Mod. Electronic Countermeasures are now available to the fighter fleet so that they have a much more robust defense against large missile salvos. Check out this post for exact effectiveness percentages by model. Additionally, ModDB is hosting its annual Mod of the Year contest, and you can vote for this project here. Look for the big "Vote for this Mod" box and help support a very active WC mod! Last, but not least, some cool pictures of last week's skipper missile have been posted. We couldn't include the images in our previous update, obviously, because the missile was temporarily invisible.

And I'm uploading a small feature for the fighter combat. It was a bit tiring to see fighters getting wrecked on both sides by the first missile salvo, so I added an ECM system (Electronic Counter-Measures). From now on, all fighters and bombers will have a chance of defeating incoming enemy missiles as they arrive at close range. The chance... depends on the fighter or bomber.

OK, so what do we have: elite fighters and the Strakha have gotten a huge boost to survivability against both the "first salvo" and various capital ships. They are now a lot more dangerous against fighter spam, as they should be. But in addition to this, the Confederation gets a sensible buff: its roster of planes is much more homogeneous and it starts right away with what other factions would consider as their "advanced" roster.

The Border Worlds, once at Tier 2, will be on a much more equal footing with the Confederation, and their Banshee is really impressive when dodging missiles. The Morningstar gets a top-level ECM because, 1, it is canonically awesome and 2, its current model's real life inspiration has an ECM self-defence suite which is apparently stuff of legends in the aerospace community.

Then, we have the special case of the Zakhari Jammer, which has the only available medium-area ECM suite and might be joined sooner or later by the Zartoth once I find a way to balance it without going too far either way (much harder than one would think for this one). This new capability can be a really interesting addition to the fleet defence, as it offers a proximity defence against torpedoes and missiles in addition to the larger area debuff to enemy craft. 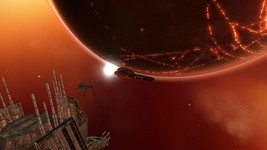 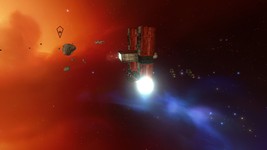 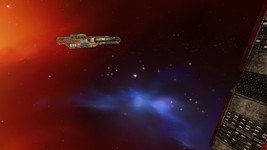 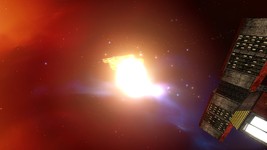