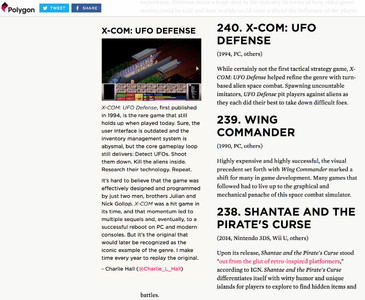 Polygon has put together a massive a feature on the 500 best games of all time. Wing Commander has made many, many such lists in its time, but this might be the longest - and furthest down - that we've seen it ever rank on. I can imagine it's really hard to qualitatively score a hundred games across many disparate genres, let alone five times that number, so it's kind of interesting to scroll through and see what they ended up with. If you ignore the numbering, which was originally the point of course, you still have a pretty cool list of 500 noteworthy games and what makes them special. Wing Commander 1 ranked number 239, ahead of both Ultima IV and VII. A proper tally would have included Wing Commander 3 and Privateer somewhere nearby, and many other series did see various sequels included, so that's one particular disappointment. And unfortunately, WC1 came in behind the 3DS title Shantae and the Pirate's Curse. At least it beat out 261 other games, including Quake 3, Diablo 3, X-Wing and Microsoft Flight Sim!

Highly expensive and highly successful, the visual precedent set forth with Wing Commander marked a shift for many in game development. Many games that followed had to live up to the graphical and mechanical panache of this space combat simulator.