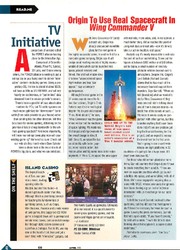 April Fools Day is coming up which means joke articles and gotchas everywhere (including here.) To get ready, we thought we'd look back at a 1996 April Fools' article printed in Computer Gaming World that concerns our favorite series. Fresh off the release of Wing Commander IV, CGW had a laugh at the game's enormous budget and endless ambition with an article claiming that "Wing Commander V" would be shot in space. Today, the article seems obviously fake... but if you can believe it, it caused significant debates in the fan community in 1996!

There were several reasons for this. News traveled much more slowly and incompletely online at the time, meaning that it was days between the first subscribers reported CGW had 'something about Wing Commander' and when the text of the article made it online. The transcribed text omitted the italicized quote crediting the article to 'The Fool' and the photoshopped Hellcat V rocket, leaving many thinking it was possible Origin had something truly crazy in the works (add to that the fact that the dates on magazines mean 'display until'... so all of this went down in March when no one was even thinking about April Fools!

The funniest part of the story is how dated some of the jokes are now. $100 million is now a perfectly ordinary budget for a game project... and Richard Garriott actually HAS flown to space and even filmed a short horror movie there! Who's the fool now?

DOS Days Turns the Clock Back to 1991