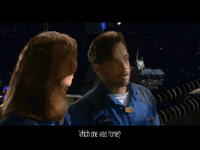 IGN UK has posted a new interview with Mark Hamill. The primary focus is his voice acting career with the Batman series, and there's some interesting stuff about how protective he was of the Joker character. He'll be voicing the next Batman game, Arkham Asylum 2, and he's also working to direct a film adaptation of his Black Pearl comic. On the subject of video games, the article also has some real cool perspective on acting in the Wing Commander series. Check out the full Q&A here. Thanks to Vinman.

Hamill may not know what went wrong but he's well aware of the challenge presented when involved in non-linear acting. "You can't tell when you're doing with these scripts that are thicker than two phonebooks, where you're doing every eventuality. There's a middle decision, a radical left, a radical right."

Wing Commander, he says, was "positively schizophrenic. I thought Malcolm McDowell was going to strangle someone on that, because you can't put together a character the way you do in a traditional narrative. One character comes up to yours with a plan and the general, Column B response is, 'Oh, OK… I'll get back to ya.' But then we do Column A and it's, 'You know, we've been going over this plan. It's brilliant!' And then it's Column C. 'Why do you waste my time with mush like this? GET OUT OF MY OFFICE!' You know, it's not the same guy. He's either reasonable or he's a pushover or he's just so antisocial he's almost psychotic. These are puzzle pieces that empower the player."

Hamill has figured out those challenges over the years. "I love games, puzzles. It's all part of my DNA to the point where I got what Chris Roberts [creator of Wing Commander] was trying to do. They're not the same goals you have in a play or a movie. But once I got the lie of the land and what it would become when it was all finished, that allowed me to get through the agony of the triple load of work you get."