Here's another round updates to Howard Day's WC1-inspired engine. There's some very interesting work happening with the fighter pilot AI. The current builds have been using the simplest version of his four-tier AI setup, and there's already been some fascinating scenarios that have dynamically emerged. Future updates will include randomized personality factors that will continue to make dogfights feel unique. Additionally, graphics for the startup sequences have also been put together that help set the tone very nicely! He's got a launcher screen that resembles the original game's menus, and there's even a parody of the Origin logo ready to go.

Huh...I can't likely show the Origin logo when this thing starts up...I guess it's time for a dad joke with some mid-nineties logo and icon design!

State of the AI - right now friendly and enemies are using only one single level: Novice. I've been building out 3 additional levels - Skilled, Ace, and Master. Novice level currently doesn't aim that well, has a tendency to ram targets *accidentally* on the first attack run, and will panic as soon as their rear shields are down and they're taking fire from behind. And by panic, I mean, pick a direction and hold the afterburners down! 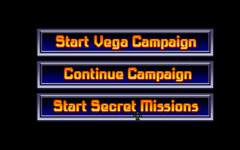 I figure the next level, Skilled, will lead the target, mostly, avoid firing at their own buddies, mostly (accidents happen!) Move out of the way if *YOU'RE* shooting through them, evade fire sooner (say 30% shields) in a more interesting pattern (virtually jerking the stick around) That sort of thing. Ace will be dead-eye shots, and all kinds of cagey. Masters... they'll mostly be unstoppable for a single player one-on-one..... :D

Novice AI already plays much better when it comes to friendly fire - both receiving and inflicting. They already try and stay out of your way, and if you shoot them enough, they'll bail and reposition for another pass. I'm also modeling two sub-systems "Impatience" and "Bloodthirst." Impatience is high on a novice - if they cant shoot at you and you're behind them, they will randomly turn away and bail to try and get a shot elsewhere. This happens enough, they'll hunt someone else. The same thing applies for their gun capacitors - if they're drained and the AI pilot can't get a full shot off, they get more and more frustrated until they pull out and re-charge.

Every pilot has different random range values for their tolerances and preferences when they spawn. This really helps the dogfights feel unique - every time I load it up it's different. One mission me and my wingmen got TROUNCED by 4 Dralthi. Couldn't figure out how. Turns out that 2 of them never left their wingleader, and the other 1 served as distraction. Focus fire from 3 Dralthi is NASTY. None of the AIs were picking up on it because they were too close and in combat lock with the 4th guy. You can bet I took a note of that and put it into the wingman code as a variant! A couple of the recent GIFs are that very scenario being visualized with the Terran side - I've got a Valtar and Hornet as wingmen, just overwhelming them in seconds.