Black Cats Stalk in the Dark

DefianceIndustries has switched over from his recent streak of big flashy stations and capships to put together something from the other end of the spectrum. This is his take on the stealth Hellcats that we see pop up in the Wing Commander 4 novel. He's managed to pull off a neat hull effect that blends the standard gray durasteel with some kind of low profile coating. The result is pretty neat and helps make the case for the Hellcat remaining in service with the Black Lance into the 2670s. 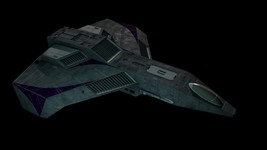 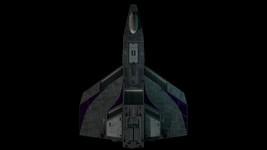 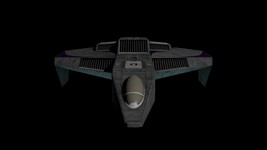 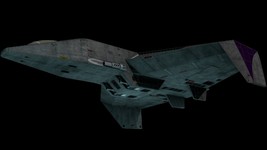 After the war, the boys over in R&D and Special Projects started slapping a cloaking device on anything with wings. They were obsessed with trying to close the gap between us and the fur balls; even after their disarmament at Torgo they still had a big lead on us in cloaking technology. So when we heard Douglas was shipping us a new model of Hellcat to test out we were a bit...skeptical is probably the best word for it. But when they brought us the first Black Cat we saw this was really the first step forward.

The cloak itself hadn't changed much, it was still a huge energy hog and it's heat dissipation curve still lagged way behind the Kilrathi's mid-line models, but the hull plating was something totally new. It was a brand new neoferro-carbon composite that absorbed incoming radar/lidar signals or simply reflected them off in a different direction. It could fly in a limited stealth mode even without a cloak engaged - and with the cloak active we were able to sneak up to the sensor nets along the Kat's border, tail a patrol or convoy, and zip away unseen. It was the first time we ever had anything like parity.

Unfortunately we couldn't do anything about the Hellcat's giant intakes and the big ol' engines, which really cut down on the Black Cat's stealth profile, the hull can only do so much. It was obvious to us then that we needed something new, even an Excalibur couldn't make full use of the new hull plating - and she was designed for a cloak out of the gate. So that's when Admiral Tolwyn stopped by my office and asked me to start drafting a new heavy fighter, something that was fast, mean, and could use the new hull and cloak to it's full potential...