Maniac536 has a YouTube channel where he recently went on an indignant rant about a story involving the Star Wars Phantom Menace trailer being shown before Wing Commander in theaters. For more than six minutes, he gushes at his nearly five thousand subscribers about how this is an epic fail urban legend perpetuated by lazy media. His evidence is that he saw the movie (only) twice at his local theater, and Star Wars was not attached. And that's entirely possible where he was. Trailers were still distributed as physical film reels in 1999, and smaller local theaters surely showed odds and ends that differed from the mainstream. Of course, as many of you are well aware, The Phantom Menance trailer absolutely was shown in front of Wing Commander, at least at major chain theaters. It was also available online, but many people still had dial up modems or no internet access at all in early 1999, and so seeing Wing Commander to catch the TPM preview was in fact a widespread activity.

THE EPISODE ONE TRAILER WAS NOT ATTACHED TO THE WING COMMANDER MOVIE.

As proof, here is a photograph I personally snapped on March 12, 1999 at an Austin, Texas General Cinema location that includes the text: "The latest preview for Star Wars - Episode 1 is being presented with Wing Commander. There will be no refunds after the Star Wars preview has been shown."﻿ So there. It was. 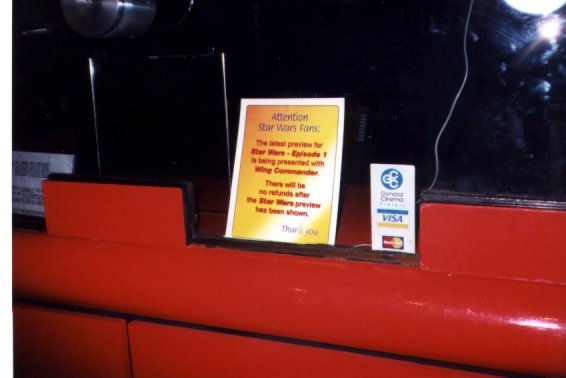 After this post was initially published, Maniac reached out to clarify that he wasn't entirely serious and no disrespect was intended to his fellow fans. We appreciate the sentiment, and we're mostly just happy people care enough to make passionate videos about Wing Commander!