The Secret Ops Model Upgrade Pack has another fearsome addition. DefianceIndustries has successfully implemented Dark Sentinel's Orca destroyer. It looks great in the Vision Engine with a blend of distinctive details and elements that shimmer into the starry blackness. There are even pinpricks of light that dot the hull to represent windows, and it's got a couple big plasma cannons as well. This particular ship isn't in the public release yet, but you can fly around with many other upgraded craft in the current beta release here. 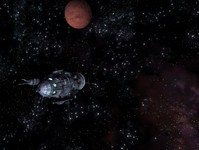 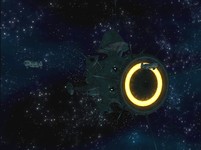 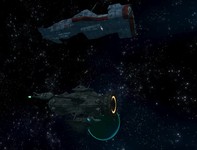 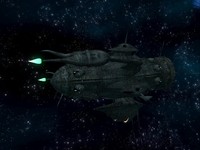 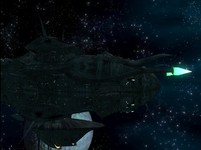 Fellow wingnuts - I give you a MUPpetized Orca, courtesy of Dark Sentinel! The learning curve on the bugs for converting capships is a bit steeper than Confed, but now that I've ironed out the wrinkles it should be smoother sailing. The bug destroyer is lean and mean - Also sporting destructible plasma guns (they aren't active but they could be with a tweak to the ship file) a destructible launcher, and some very nice damaged/destroyed meshes. It should look quite satisfactory blown up as well as menacing your Pelicans. 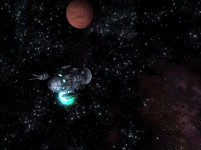