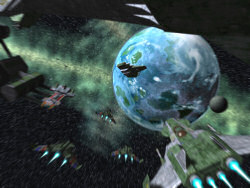 The Standoff team is happy to release the single package install (462 MB) for the CIC's 18th birthday. This file will install the complete game without the need to download multiple packages.

As a team, we'd like to extend a very heartfelt thank you to the Wing Commander community for all the support over the years...and patience. Now get out there and save the Confederation...again!