Origin composer George Oldziey has added a new Paypal option for fans who didn't get a chance to secure their copy of the reorchestrated Wing Commander album during the original crowdfunding campaign. This allows Wingnuts based outside the US to donate and receive it either digitally or in physical form. Find all the details at Mr. Oldziey's website. He's also posted several awesome samples to give people an idea of what to expect - listen below! 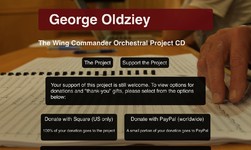 In 2014 I launched a Kickstarter campaign to document the music I created for the Wing Commander games in the way I had originally imagined it: for full orchestra and chorus. 588 generous supporters helped me reach my goal! In late 2014 I traveled to Bratislava, Slovakia, where the 95-piece Slovak National Symphony Orchestra and the 40-voice Lucina Chorus recorded this music under my supervision.

After months of editing, mixing, and mastering the resulting recordings the audio is now ready in both CD and digital-download formats. Please enjoy the samples below!