Wingnuts do tons of great things each year, but whatever happens to the fan projects that don't quite make it to release? A number have gone by the wayside over the years, and the CIC archives go all the way back to 1998 (or further!) so there's a few loose ends out there. Phoenix dropped in to tie one up with the story of the Wing Commander Rebel Assault fan movie that was in work nearly fifteen years ago. He's dug deep into his old hard drives to share what was completed, which includes some never before seen footage. Although the models might look a bit dated now, they were cutting edge for early 2000s amateur rendering tools and abilities. This is a great look back at what the community was up to back in the days of dial-up modems and 166 MHz Pentiums with 16 megs of RAM! 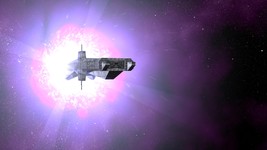 Way back in 2000 some may remember the Wing Commander: Rebel Assault movie that was being made. I released a trailer for it and a year or so after that - due to my inactivity - "Tolwyn" of Wing Commander: Saga released a short clip on my behalf that I'd made of the Dragon assault on a Kilrathi fuel depot... and that was it, nothing more was said and it all vanished.

Well, it was ambitious for a completely solo venture and even moreso given that the project was the product of me learning to both model and animate at the same time from scratch. The biggest problem I encountered was not only time but quality control. As time went on my modeling and animation improved dramatically, so much so that the quality of later scenes was so much better than earlier ones that they just wouldn't fit together. I could also do things that I hadn't been able to achieve previously. I couldn't afford to continually remodel existing work and with life taking precedence I just gave up. 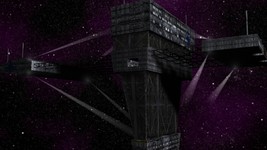 A whopping 15 years later, which is hard to believe, I decided to dig out some old archives from the PC I had back then. I figured that maybe some people would be interested in why the project vanished and what was made but never released. The data is fragmented over various drives but a lot of the animation is still there in all its glorious 320x240 resolution. 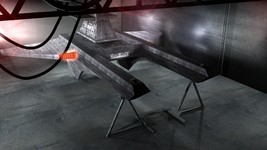 I had some free time and, while it's been a long time since I've touched 3D software, I decided that I'd attempt to re-render some of the work in a somewhat improved resolution with double the original frame rate. Given the leap in PC technology since 2000, what would've been a week long job with the PC running 24/7 now takes just a few hours. Much of the formatting was lost from the old version of software I was using and some textures are missing. Particle and lighting effects are also broken in many place also many of the scenes were designed for a 320 resolution and so even the new resolution is really pushing what's there without making defects. Ultra-low poly models and low res textures look too awful. I've provided a couple of 1080p renders of scenes where the level of detail was sufficient to allow such resolutions, while others struggle to look decent even at 480p...

I've uploaded a new version of the Rebel Assault trailer to youtube along with a reel attached immediately after the end of unreleased scenes that were either due to be included or had been scrapped totally for various reasons. There is a lot of other stuff related to Privateer, Starlancer and Jumpgate's Drakhai which I haven't yet gone through. If sufficient interest, I may look at reworking some of that.