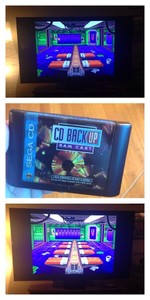 CIC Staffer and Star Citizen community manager Ben Lesnick recently picked up an external memory cart for his Sega CD (aka Mega-CD) gaming console. Why is this news? Because the Sega CD port of Wing Commander has a cool visual effect when you have this add-on plugged in. Shaped like a Mega Drive cartridge, players could transfer their savegames to or from the memory cart. A useful feature, because the Sega CD only came with 8 kilobytes of storage capacity for savegames. In supporting games, like Wing Commander, the player could simply save their progress directly onto the cart's ample 128 kilobytes. In the Tiger's Claw barracks, all 8 bunks become available when you have it plugged in! Check out LOAF's pictures below to see the difference.

The Sega CD port of Wing Commander I stays very close to the original, but there are some interesting differences too. Check out this story from 2010 to see them compared. The Sega Wiki has more details on the external memory card:

The Sega CD Backup RAM Cart is a utility that holds 16 times more game information memory than the internal RAM memory of the Sega CD (with its storage size being 1 Mbit total), which is useful for long-playing games and for not having to start over at the beginning every time the player(s) starts a game. It retailed for $60 U. S. upon initial release.

Before initial use, the Cart has to be formatted, although this is instantaneous with just a press of a button on the Genesis controller during the menu screen, no waiting or any further actions would need to be taken by the user after that. The unit could be formatted again if the user wished, but any game information stored on the Cart would be erased.

The unit plugs into the Sega Genesis cartridge slot (as it resembles a Genesis cart) before the power of the Genesis and the Sega CD is turned on in order for it to be able to start saving game information.

At the absolute maximum, the Cart can hold memory of up to 10 games, as opposed to the Sega CD's capacity of only four. However, some games require multiple save slots, taking up more room on the Cart than others.

The Cart doesn't have many other functions or actions to be taken other than storing game information and formatting the unit. On the onscreen menu, data from the Cart can be viewed, erased, and/or copied to the internal Sega CD memory, or vice versa.