The Blue and the Gray

There's a pair of new fighter renders from Scooby's Wing Commander hangar, and both sport the heavy metallic colors that have become characteristic of his designs. The first model is the complete version of the beefed up Arena-inspired Arrow. All the extra armor that often makes its way into his craft really fits well with the Arena style of ship design. There's also a pair of Scimitars that have just been completed. You only get a side view in this shot here, but the acceleration absorber pods are unmistakable! 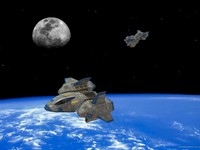 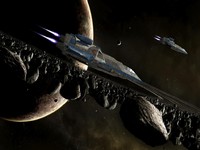 There's some pieces of the Mk V (WC3/4) Arrow along side with a couple from Arena, plus some personal liberties. The intakes were the most frustrating on where exactly to put them.