Today's RSI Time Capsule relates some interesting political manuevering that has opinions divided and emotions high: 2523: The Three Pillars. Also check out the RSI Museum for info on one of Chris Roberts' earliest games - King Kong.

And lastly, everyone has been waiting anxiously to see if their question was among the five that Chris Roberts has replied to! Check out Chris Roberts answers here!

Do you think it’s possible to bring space sims back into the mainstream? If so, how?

YES! I feel like the appeal of Space Sims has never really gone away, it’s just that people stopped innovating and pushing the boundaries of what you could do. For me, games are all about immersion into a world. I think that’s what the Wing Commander series was best at and that was what I was aiming for when designing Freelancer.

Is that Chris Roberts on the right of the panel? 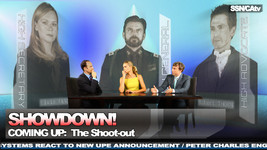 Happy 15th Birthday Ultima Online! The world's first modern massively multiplayer game was released on September 24, 1997 by Origin Systems. Its continued existence is no small feat - many, many younger and bigger-budget MMOs have gone by the wayside just a few short years after release, so for the original to still be standing is truly incredible. As a sister franchise to Wing Commander in the 1990s, many Wingnuts beta tested UO during its early days, and the first iteration of the CIC even briefly shared a web server with the game.

It's been about two years since the last expansion, High Seas, was released, but the game has been actively exploring a new plot arc this year that's has culminated in today's in-game events. The fans that remain in the game today are a diehard bunch of adventurers, and we're sure they're all looking forward to another 15 years! Congrats UO!