"If half of what they say about those new Rapiers is true..."

Here's another impressive installment of LOAF's adventure to build the ultimate Wing Commander Computer, Karga the Hero. With networking down pat, the focus has turned to some of the amazing input devices out there. We saw one QuickShot MasterPilot functioning last time, but now three synchronized units are working together! These complement a full range of Thrustmaster pedals, throttles and flight sticks that have special Wing Commander features. There's even a SideWinder GameVoice in there. All told, there's some $2000 worth of WC-specific input hardware arranged together (based on the original MSRPs), but some dogged eBaying and junk shop-exploring has outfitted this setup for a tenth of that. Special bonus: check out LOAF's real life Mr. Kat Christmas present! 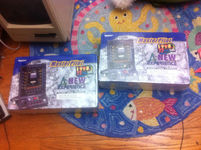 This should be an interesting update! (... if you like reading about joystick software from the early 1990s.)

What made these special was that when you had the whole system you could program all the buttons to work with your particular game instead of just having it assume the trigger was the space bar and another button was enter and so on. You would do this by using software to load "stick set" files into the throttle (which was the brain of the operation.) Now there's some interchangability -- you could have an FCLS with a WCS Mark II or with a TQS, for instance, but in general there were three different types of stickset files.

Back in the day people would create them, trade them, talk about them and so on. It must have been fun (I never had a fancy stick when I was a kid.) You can still find bits and pieces of this online, but it's mostly been washed away by the years and the general move to the internet being a place for spying on girls you didn't talk to in high school instead of for talking about Star Trek.

Now when I set out to build Karga I went with the system that was 'new' when the first Wing Commander games came out: the FCS joystick and the WCS Mark II throttle (the original WCS throttle wasn't programmable, I only mention it here because Bertha has one.

Was that a mistake? To make a long story short, yes it was.

After a little searching, I found this great little site that has an archive of the old factory-fresh Thrustmaster software: http://www.cvscorp.com/thrustmaster.html

I also enjoyed this site's disclaimer, in that it made me fairly sad and is relevant to what we're doing here (and how we all are starting to feel): "After searching around the internet, there appears to be only my site left offering scripts and profiles for TM Sticks. I want to thank all those who downloaded these files over the years. I'm getting older now, and these sticks have become relics, like myself. Enjoy them while you can. I no longer have the energy, money or interest in providing support for ThrustMaster."

Anyway, I installed all of the different Thrustmaster packages (on my work computer, no less) and learned...

... and then the F-22 comes with a treasure trove: conversions of the earlier four sets plus two more advanced sets for Wing Commander III and Armada!

Long story long, it's time to upgrade my joystick. Out with the WCS Mk. II and Pro FCS (which hasn't even shown up in the mail yet!) and in with a TQS throttle and an F-22 Pro stick.

(And yes I checked to see if the next generation setup, the HOTAS Cougar, came with Wing Commander sets; it does not! I-War, though, for some reason.)

Here for you, dear readers, are all the "official" Thrustmaster Wing Commander sticksets in one convenient archive: https://download.wcnews.com/files/other/wcpc/STICKSETS.zip

Oh, I had a question via PM: what's the OTHER box on top of Karga? That's a Roland MCB-1 breakout box, which is needed to chain other MIDI devices to the LAPC-I (in this case, the SC-55.) Having to dig one up does make the process a little complicated, but when I initially bought it back in 2003 or so they were actually pretty common. It looks little, too, but it's made of heavy metal.